I used to really hate ginger, mostly because my mom would use it a lot in her cooking, and I'd always end up with a huge chunk of it in my mouth. But since I've started traveling so much, I always make sure I have a bag of crystallized ginger or ginger candy on me in case my stomach feels queasy. So I was really excited to find this recipe for homemade crystallized ginger on The Kitchn yesterday. It's super simple, and best of all, you get ginger syrup as a byproduct! This is the stuff that they add to dou hua (tofu pudding) in the winter, and it's just amazing how it will warm you up.

Serendipitously, as I was walking to the dentist yesterday from work, I passed the Chang Shing Tofu factory just as someone was coming out for a smoke. Four years ago, I had tried to buy tofu from there because I had heard tales of MIT students doing so, but could never figure out how to get past the locked front doors that didn't have a doorbell. So this is a quest four years in the making, my friends. I excitedly asked the guy if I could buy tofu, and he said in broken English that I should go to the door. I went to the same front doors I had tried years earlier, and wouldn't you know it, they were still locked. But then I heard the guy telling me to go down to the next door. There's another door? About half a block down next to the garage door, there's a little door (that does have a doorbell next to it) that was...unlocked!

So I went in and am immediately confronted with another guy packing tofu into these large containers. I timidly ask him if I can buy tofu here, and he kind of gestures for me to go further in. I start wandering around by myself, and it's just a bunch of big machines with guys working them and ignoring me for the most part. I feel as intimidated as I do when I'm in a Home Depot. After wandering through a few rooms without finding anything that looks like a storefront, I wander back to the first guy and ask again. He stops what he's doing for a second, opens the door to the outside, and sets off some sort of buzzer (okay, maybe he just rang the doorbell, but it looked more complicated than that). Finally, this guy from another section comes over, and I ask again if it's possible to buy tofu here. He indicates a product listing on the wall, and happily tofu pudding is listed. So I buy a container from him and head back out to coldness that is Cambridge in November. Mission: accomplished!

Back to the ginger: make sure you pick roots that are young and firm (vs. old and spongy). It is easier to peel big bulbs, and the best tip I ever picked up is to peel the ginger with the edge of a metal spoon instead of a knife or peeler. The skin is so thin it comes off super easily, and a spoon is much easier to handle when you get to the weird crevices. One change I made to the recipe is that I used rock sugar (the big yellow crystals you find in a box at Asian grocery stores) because I like the flavor better. 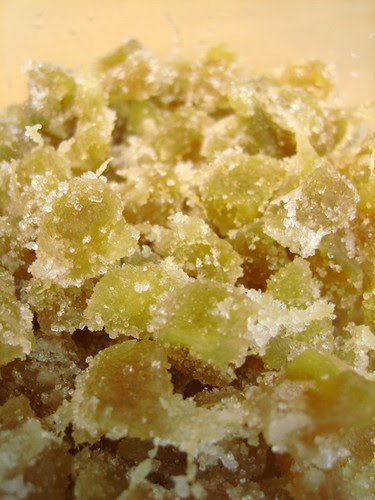 Combine water and 1 1/2 cups rock sugar in a small saucepan and bring to a boil.  Add ginger, reduce heat, and simmer for 20 minutes.

Let stand until dry, turning over if necessary, and then roll slices in white sugar.

Store in an airtight container for up to three months.

The next time I make this, I will see if I can get away with not rolling it in sugar at the end, so I get something more akin to Trader Joe's Uncrystallized Candied Ginger. Since the ginger is quite tacky after the sugaring process, I might need to coat it with something so that it's not so sticky, though. Maybe a light dusting of a mixture of confectioner's sugar and corn starch....

For the tofu pudding, I just scooped some out and plopped it into a bowl and then drizzled the ginger syrup on top. That's it! Ah, sweet happiness that can be found in a bowl.... =)
Posted by Joy at 3:04 PM