When I first read about Humphry Slocombe's lard caramels, my first thought was, why didn't they just use bacon fat instead of lard? After all, candied bacon was all the rage already, and wouldn't bacon fat caramels sound so much more appetizing than lard caramels? And for those of you who think bacon fat caramel sounds disgusting, well, we don't have to be friends anymore. ;) 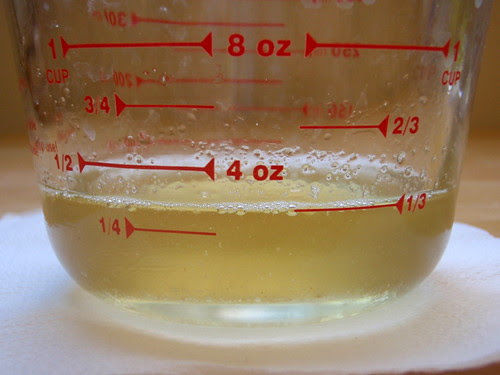 So I made sure to save as much bacon fat as I could from the bacon I used for the bacon caramel corn. I ended up with a little over 7 tablespoons of fat from about 10 oz. of uncooked bacon. I searched on-line to see if anyone else had posted a recipe for bacon fat caramels, but the only one I found used sweetened condensed milk instead of cream. I usually like sweetened condensed milk in my desserts, but it is a pretty strong flavor, and I really wanted the bacon flavor to shine through, so I ended up using a recipe for fleur de sel caramels and just replaced the butter with bacon fat. 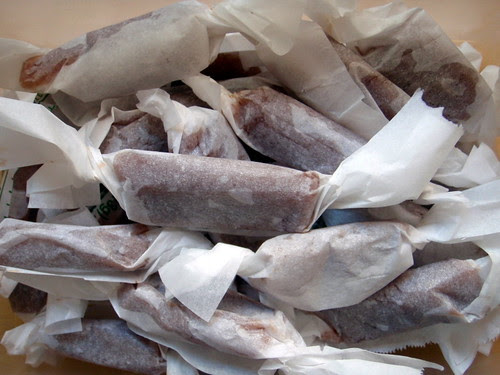 Bring cream, bacon fat, and salt to a boil in a small saucepan, then remove from heat and set aside.

Boil sugar, corn syrup, and water in a 3- to 4-quart heavy saucepan, stirring until sugar is dissolved. Boil, without stirring but gently swirling pan, until mixture is a light golden caramel. 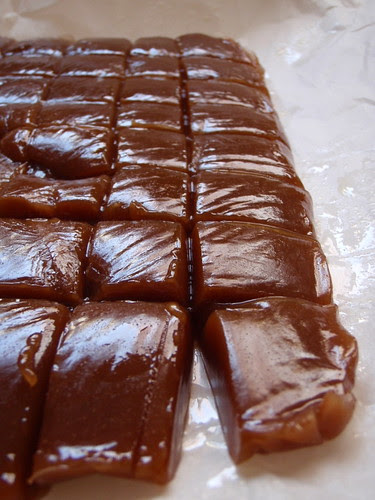 Carefully stir in cream mixture (mixture will bubble up) and simmer, stirring frequently, until caramel registers 248°F on thermometer, 10 to 15 minutes. Pour into baking pan and cool 3 hours. Cut into 1-inch pieces, then wrap each piece in a 4-inch square of wax paper, twisting 2 ends to close. Store in an airtight container in the refrigerator.

Optional: Sprinkle diced, cooked bacon and/or sea salt on top of the caramel when it is still slightly soft. 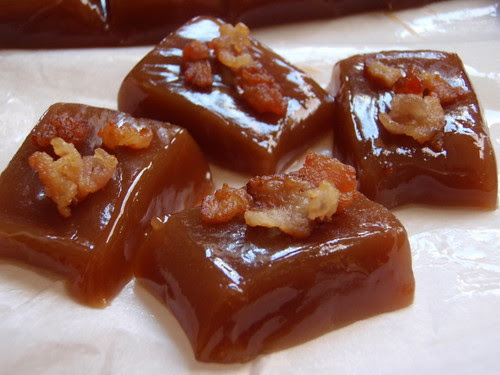 I actually didn't have any wax paper but found that wrapping the caramels in parchment paper worked fine. The caramels were pretty greasy, but I think that was more because of the oil I used to grease the parchment rather than from the bacon fat itself. I did notice that at room temperature, the caramels are really quite soft, so I would definitely keep these chilled until you serve them.

As for the taste, some people have said it tastes like bacon drenched in maple syrup. Others have said that they didn't even taste the bacon until they bit into the part that had a bit of diced bacon in it. I did prefer the pieces that I sprinkled sea salt (I used Maldon sea salt) on more than the pieces that just had diced bacon because I think the texture worked better with the sea salt. Although, I did press all the fat out of the diced bacon, so maybe if they weren't so dry, it would have worked better.

Oh, and since I had two leftover butter wrappers after making the bacon caramel corn, I cut them up to wrap some of the caramels. I kind of like how they look, even though it's false advertising. 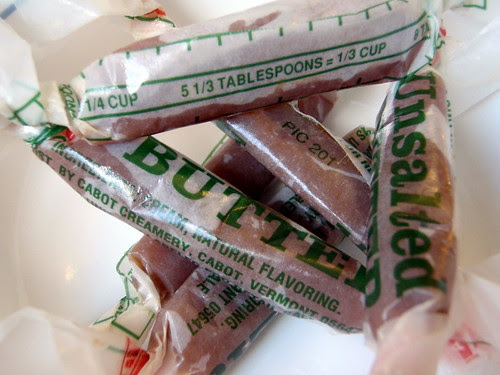 Next:   Momofuku's Crack Pie
Previously:  Caramel Bacon Corn
Posted by Joy at 8:54 AM