Every once in a while I'll scan Craigslist to see if anyone's selling an ice cream maker with its own compressor. They're usually several hundred dollars, so it's something that would be nice to have, but definitely not necessary, especially since I have such a reliable Cuisinart ICE-20. But a couple of weeks ago, I found one being sold for only $80. I was a little suspicious so I asked the seller why he was selling it, and he said that he was getting married, and his wife-to-be wanted him to get rid of stuff. Well, I was more than happy to help him out. It was a nice surprise when he included four ice cream sundae glasses, an ice cream scoop, and two ice cream recipe books with it as well!

The ice cream maker in question is a Lello 4070 Gelato Junior, and I love it! No more needing to pre-freeze the canister; I don't even need to chill the ice cream base before starting up the machine! The only thing I miss about my Cuisinart is that I can't really get any good pictures of the ice cream as it's churning....

One recipe I really wanted to try out in my new ice cream maker was this one for coconut lime sorbet. It's definitely one of my all-time favorite ice creams to make, and even won the ice cream thrown down I participated in a couple of years ago. But it doesn't always freeze well. There's definitely been a couple of times when the Cuisinart canister started melting before the sorbet was done churning. So I knew that it would be a good way to test how well the Lello ice cream maker worked. 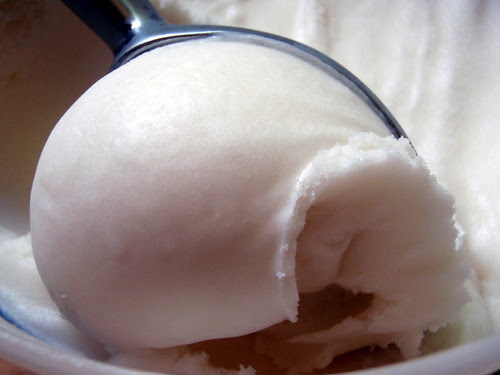 In a bowl whisk together ingredients. Freeze mixture in an ice-cream maker. Transfer sorbet to an airtight container and put in freezer to harden. 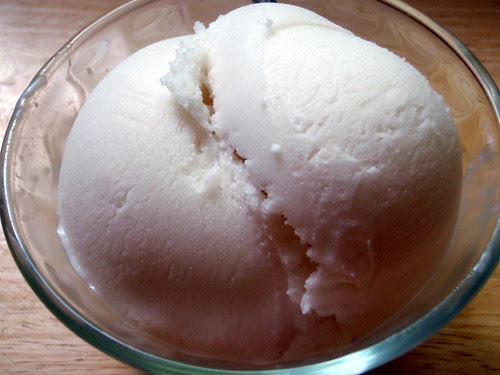 I love the fact that there are only three ingredients for this sorbet; two, if you don't count the water. Also, you don't need to heat or chill the base before freezing. In fact, you shouldn't chill the base because then the coconut fat would solidify out of the mixture. What I think is kind of interesting is that it does harden when you're churning it, but since it's dissipated throughout the sorbet, it almost forms chips of coconut fat, adding a little bit of texture. I think it's almost a misnomer to label this treat a sorbet because, even though it doesn't contain any dairy, it's so super rich! The sweetness from the cream of coconut and the tartness from the fresh lime juice is also really intense.

I've used bottled lime juice before in a pinch when I didn't have any fresh limes, and it tasted just as good. I would definitely NOT substitute coconut milk for the cream of coconut, though. Cream of coconut is a lot sweeter and fattier than coconut milk; if you use coconut milk instead it just won't have the right amount of sweetness or texture. Trust me on this one. One last thing, just as this sorbet doesn't freeze well, it also melts rather quickly, so make sure you take it out only right before you want to serve it. 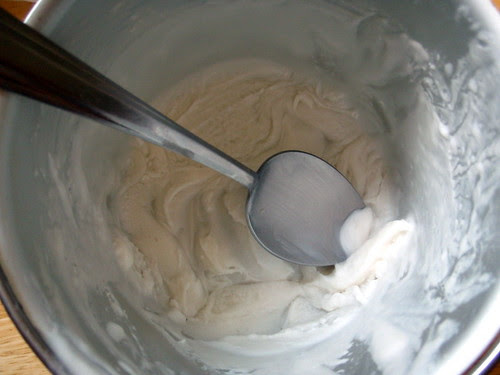