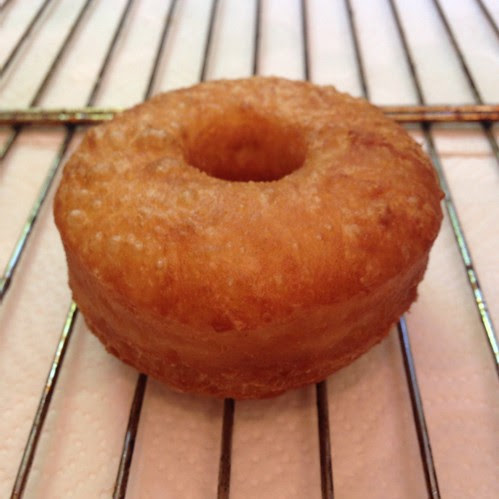 I got a request from a friend last week to make some cronuts so that he would know whether or not they were worth waiting in line for at Dominique Ansel's bakery.  If you haven't heard of the cronut yet, it's a cross between a croissant and a donut created by Ansel.  Basically, croissant dough is cut into a donut shape, deep-fried, filled with pastry cream, and then glazed on top.  Only 200-250 are made a day so now there's a whole black market for them with some scalpers selling them for upwards of $40 per cronut (normally priced at $5).  Crazy, right?

At first I was hesitant to make my own because from my previous experience with making croissants, it would take at least 2.5 days, but then while surfing the web for other bloggers' attempts at home, I found this post using "20 minutes croissant dough".  That sounded much more feasible!

Instead of using caster sugar (a finer sugar than granulated, but not as fine as confectioner's), I used plain granulated sugar for the lemon sugar.  I realized my mistake when I had a hard time making the lemon sugar stick to the just-fried donuts.  Since caster sugar isn't readily available in the States, I'd recommend using a food processor to grind regular granulated sugar into a super-fine, but not powdered, consistency.

Lastly, I tried making the filling in the recipe, but it came out way too thin and drippy for me to consider piping into the cronut.  I guess I was expecting something more the consistency of the cream inside a Dunkin' Donuts Boston Cream donut, which is basically pudding-like.  The filling I made was already dripping out of the pastry bag before I could even apply any pressure to it!  So I ended up just rolling the cronuts in the lemon sugar and glazing it with the lemon icing.  I think it would've been nice to have had a cream filling, but it was fine without it, too. 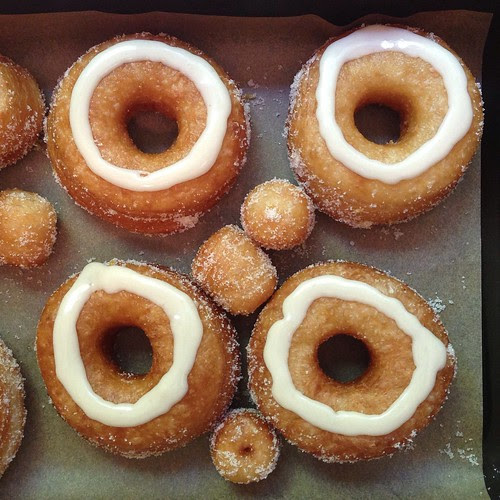 For the lemon sugar and glaze 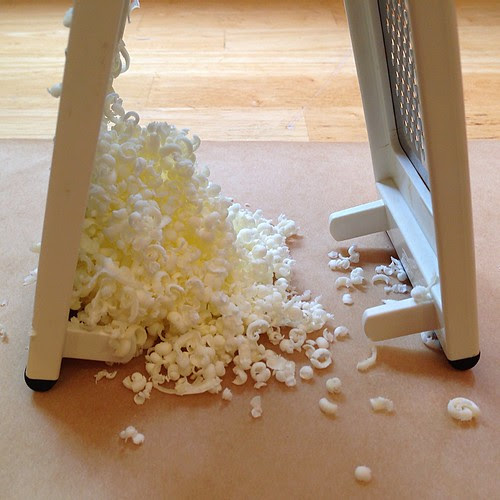 Once all the butter has been tossed into the flour mixture, add the yeast solution and stir gently just until combined, trying to moisten everything without making the butter any smaller. Gently knead the dough until it comes together into a ball.  Cover the bowl and let the dough rest in the refrigerator for a few hours. 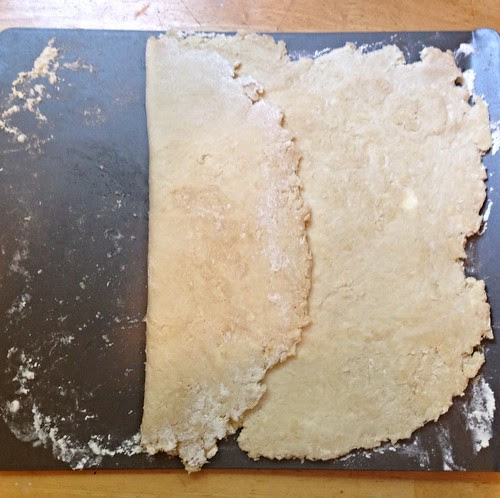 After the dough has rested place it on a well floured work surface. Roll the dough out into a roughly 15"x15" square. Fold the dough in thirds, like a business letter, brushing off any excess flour.  Turn the dough 90° and repeat the rolling,folding, and rotating process two more times, giving the dough a total of three turns. 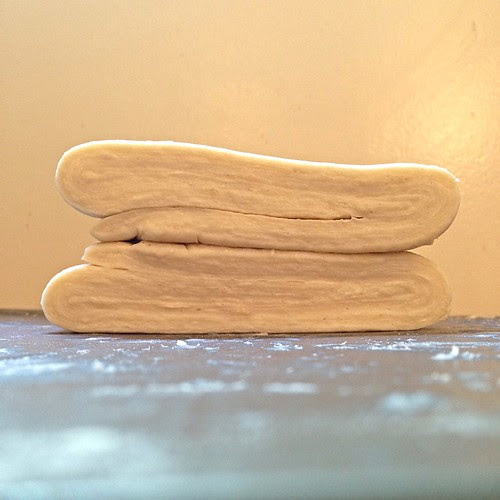 Using a sharp knife, cut the rectangle in half crosswise.  Wrap both pieces of dough in plastic wrap and refrigerate overnight before using. 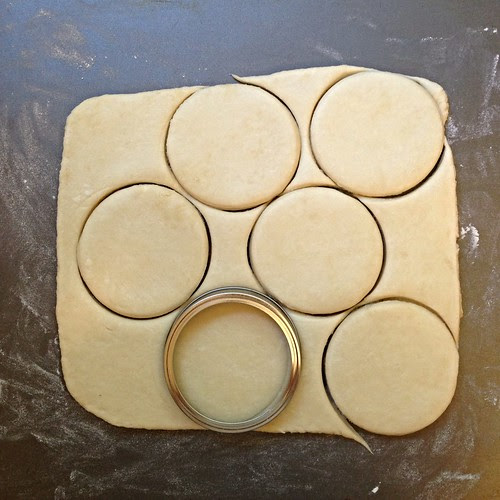 The next day, roll out one of the two pieces of dough to about 1 cm thick, much thicker than you would roll the dough if making a croissant. Using a 3 1/2" cookie cutter (I used a large jar lid), cut out 5 donuts and then using a 1" cutter cut out the holes. 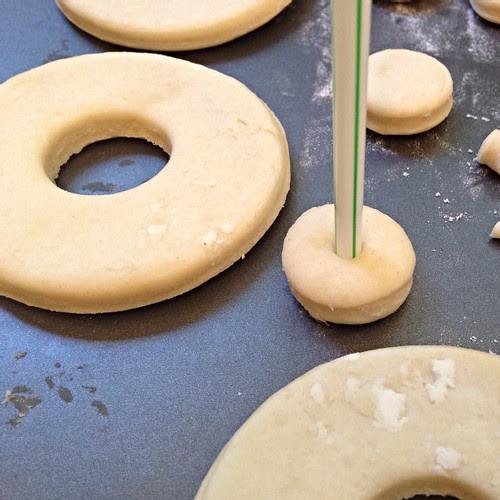 If you want, cut out a hole in the 1" circle with a straw to make mini-cronuts.  I also cut out medium-sized cronuts from the scrap dough.  Repeat with the other piece of dough.  Allow the cronuts to proof at room temperature while you prepare the lemon sugar and lemon glaze. 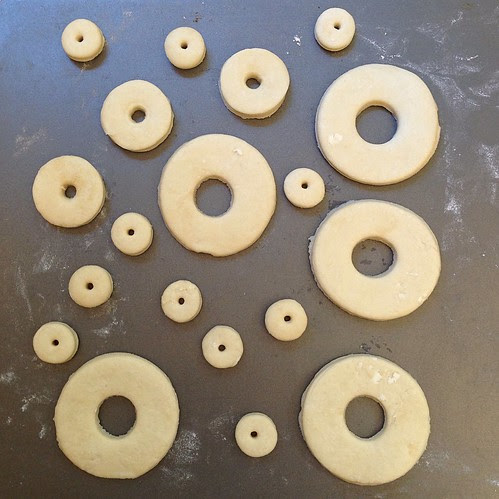 To make the lemon sugar, add the sugar to a food processor and grind until the sugar has a super-fine consistency but is not yet powdered.  Carefully empty the contents into a wide bowl.  Zest the lemon, and add the lemon zest to the sugar.  Rub the zest and the sugar together until thoroughly mixed.  Cover and set aside. 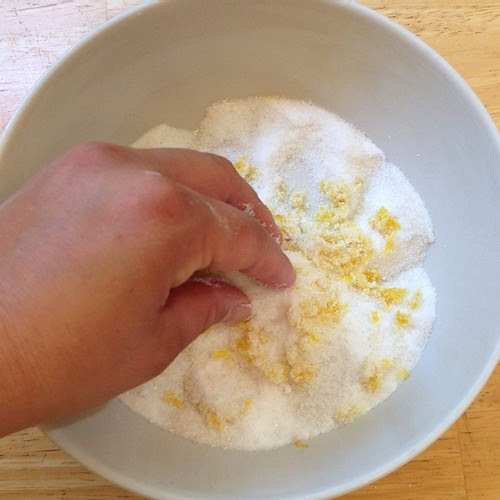 To make the glaze, juice the lemon.  Add enough confectioner's sugar to the lemon juice until you have a thick, pipeable mixture; you are looking for a thickness similar to toothpaste. I think I ended up using over 2 cups of confectioner's sugar, although I stopped keeping track after a while.  Press plastic wrap onto the surface of the glaze to prevent it crusting over and set aside until needed. 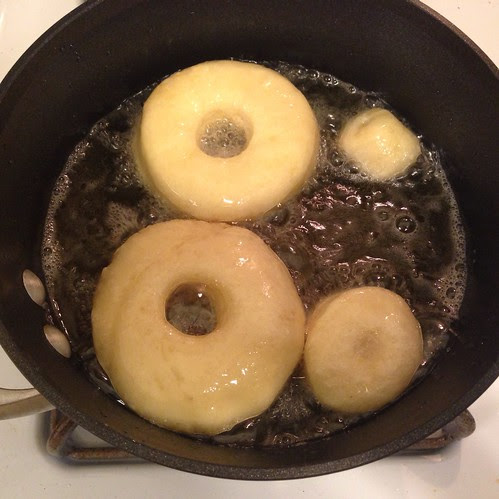 When ready to fry fill a thick bottomed saucepan two thirds full with vegetable oil and place over medium heat and bring to 170°C. When at temperature fry the cronuts two at a time (I also put in a few of the smaller cronuts in at the same time). 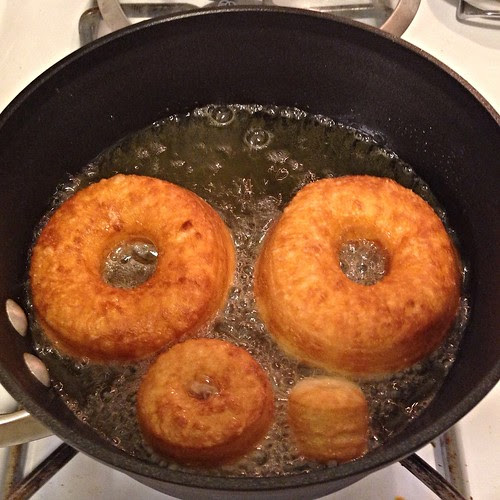 Fry the cronuts for a couple minutes each side, or until deep golden brown. 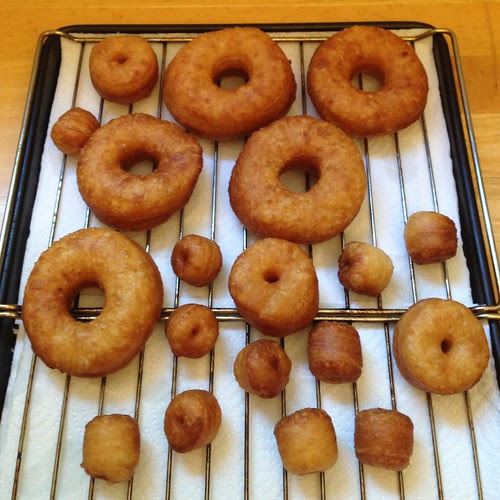 Using a metal slotted spoon remove from the pan and place onto a wire rack set over paper towels. Once cooled enough to handle roll the outside of the cronuts in the lemon sugar, set aside to cool completely. 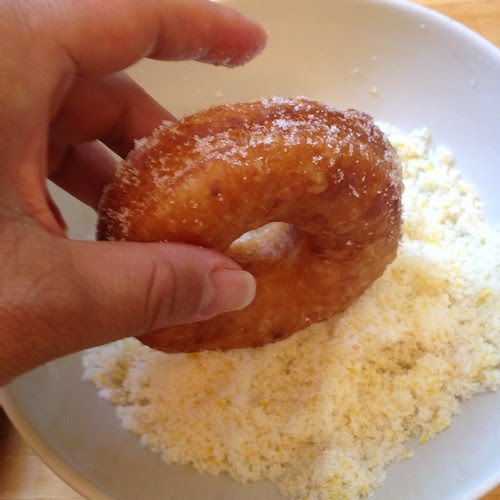 For the decoration place the glaze into a piping bag, snip off the end, and pipe a ring around the top.  Serve immediately. 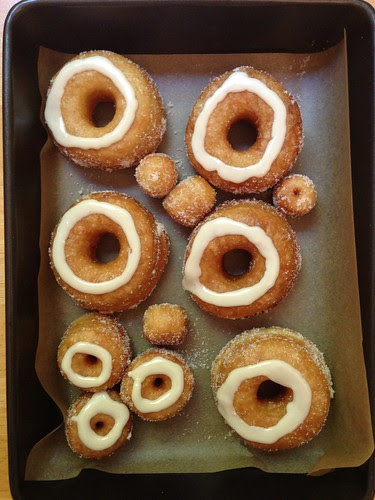 So the verdict?  When I took my first bite, it reminded me of something else, but I couldn't quite put my finger on it.  Then I realized, it tasted a lot like the sugared donut holes you sometimes see at Chinese buffets.  Which, don't get me wrong, are delicious.  But I'm not sure making a cronut was worth all the effort, even though I had only made a simplified version. 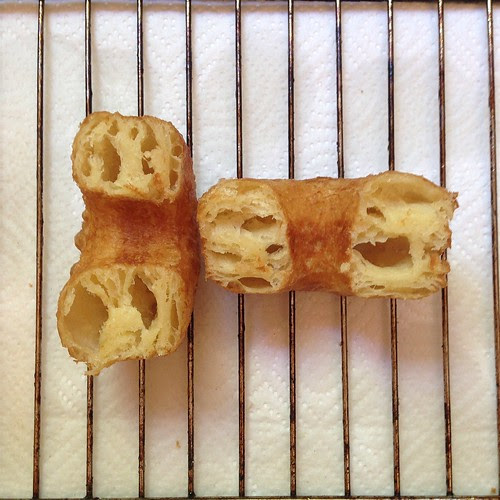 As you can see from the cross-section, I didn't really get the layers you expect from a croissant dough, although there was definitely plenty of air pockets.  If anything, the texture reminded me of the lilikoi malasadas I made, which while really delicious, are definitely not worth $40.

If I were to ever really crave a cronut, I'd probably just pick up a package of frozen croissants from Trader Joe's, thaw them in the fridge, roll and cut them out, and then let them proof before frying them.

Update:  So the other day while I was cleaning out my freezer, I happened upon some of the homemade croissant dough that I had stashed away and forgotten about.  I saw no other option than to try making cronuts out of it, and the result was drastically different than my above attempt with the "20 minute" croissant dough.  Just look at this: 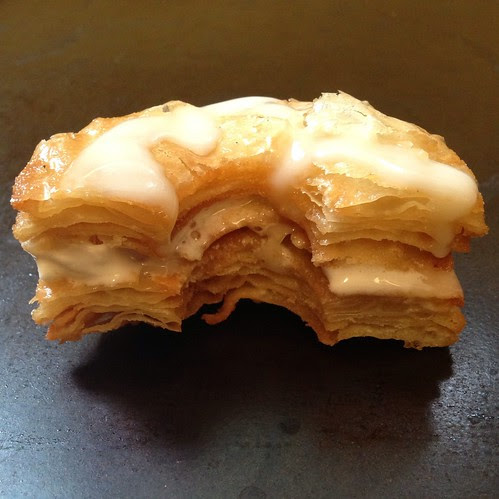 Even without a pretty ring of glaze you can immediately see how much better it looks with all the different layers.  The texture was a lot crispier, and my friend Christine took to eating her cronut layer by layer, which would've been impossible with the other cronuts I made.  This time I also filled the middle with some coconut whipped cream sweetened with lemon sugar.  The whole thing was still a little too greasy for me, but I'm glad I tried it out nonetheless.