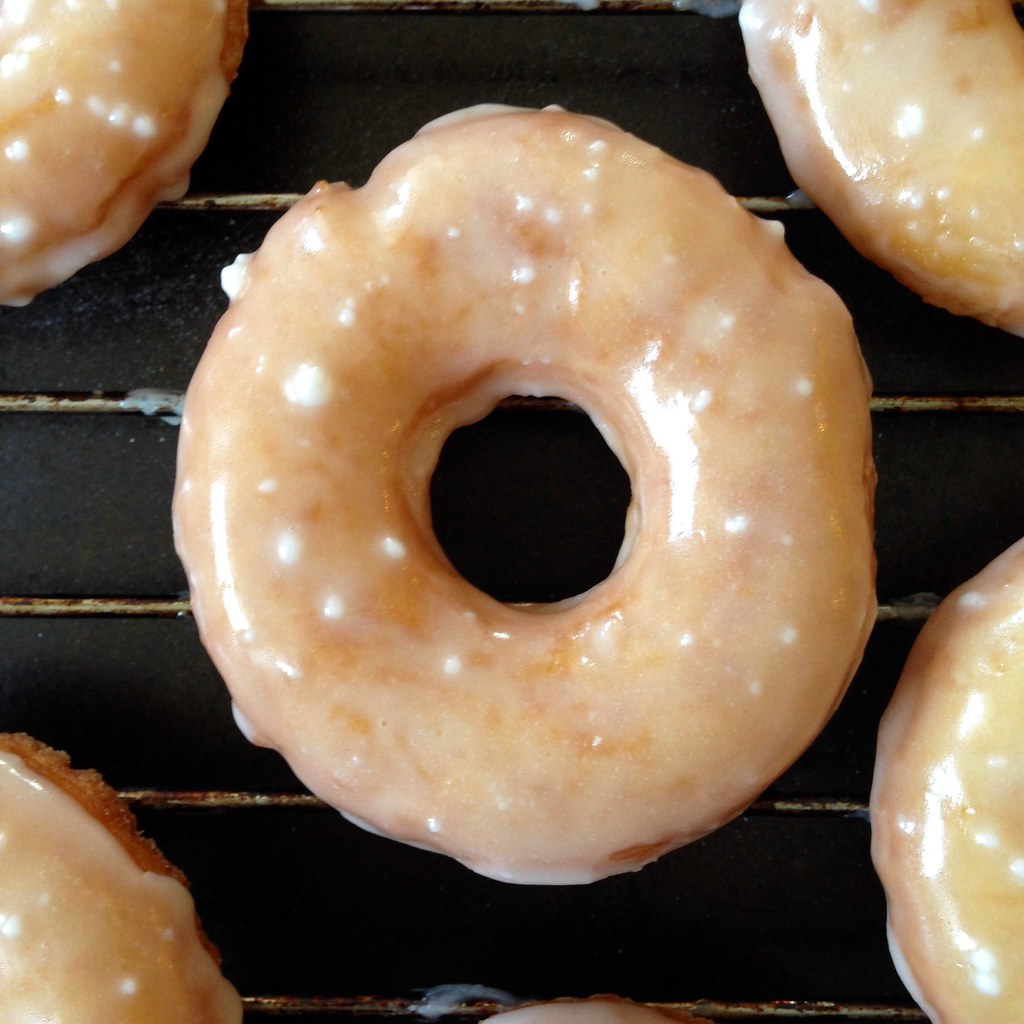 Move aside cronut, the next hybrid donut is here, and it's the mochi donut!  After I first saw Lady and Pups' post on mochi donuts, I couldn't stop dreaming about making them. What's not to love about a chewy ring of mochi deep fried and sugar glazed?  Then I read one of the comments that mentioned rolling the donut holes into balls and forming a ring out of them to make pon de rings! 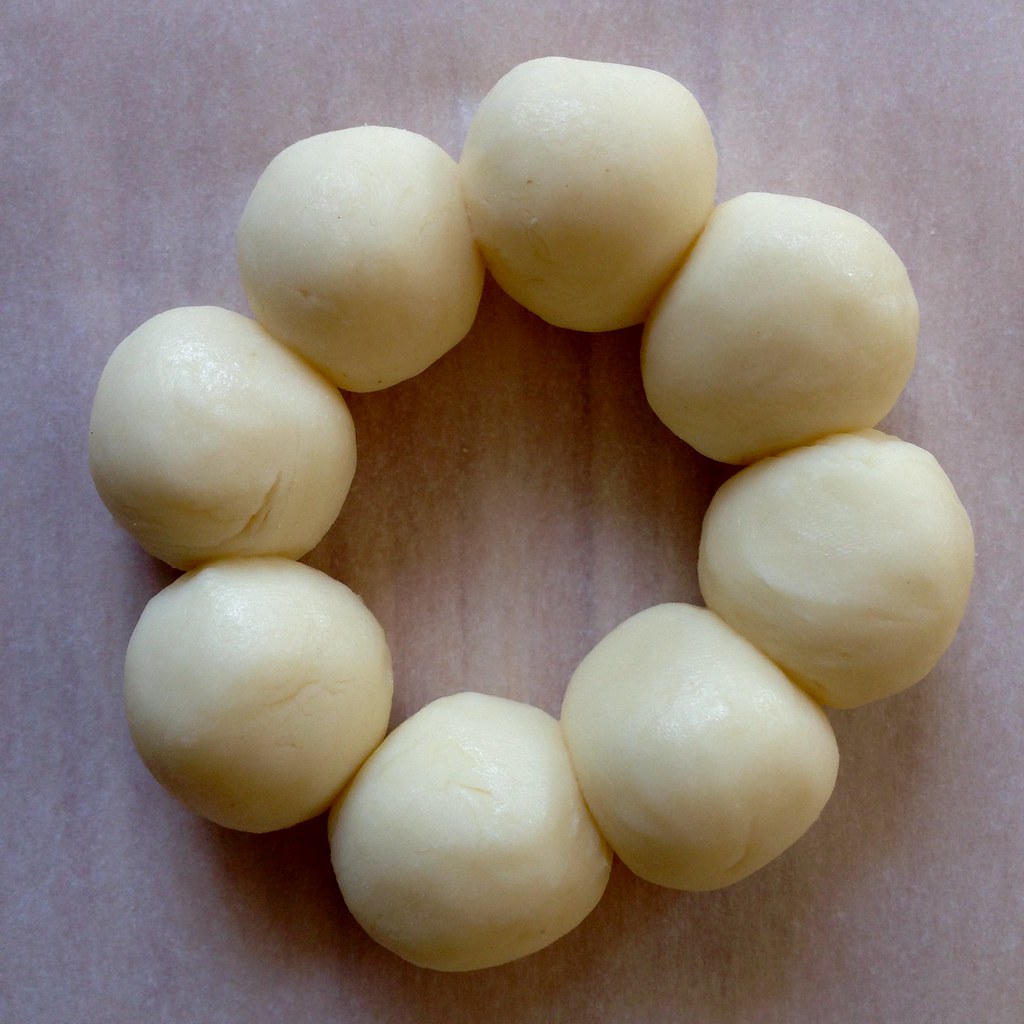 If you've ever been to Taiwan (or Japan, Korea, and probably other parts of Asia) I'm sure you've seen the ubiquitous Mister Donuts and their almost-too-cute-to-eat pon de rings.  They're made out of a chewier dough than their regular donuts and shaped like their mascot Pon de Lion's mane. 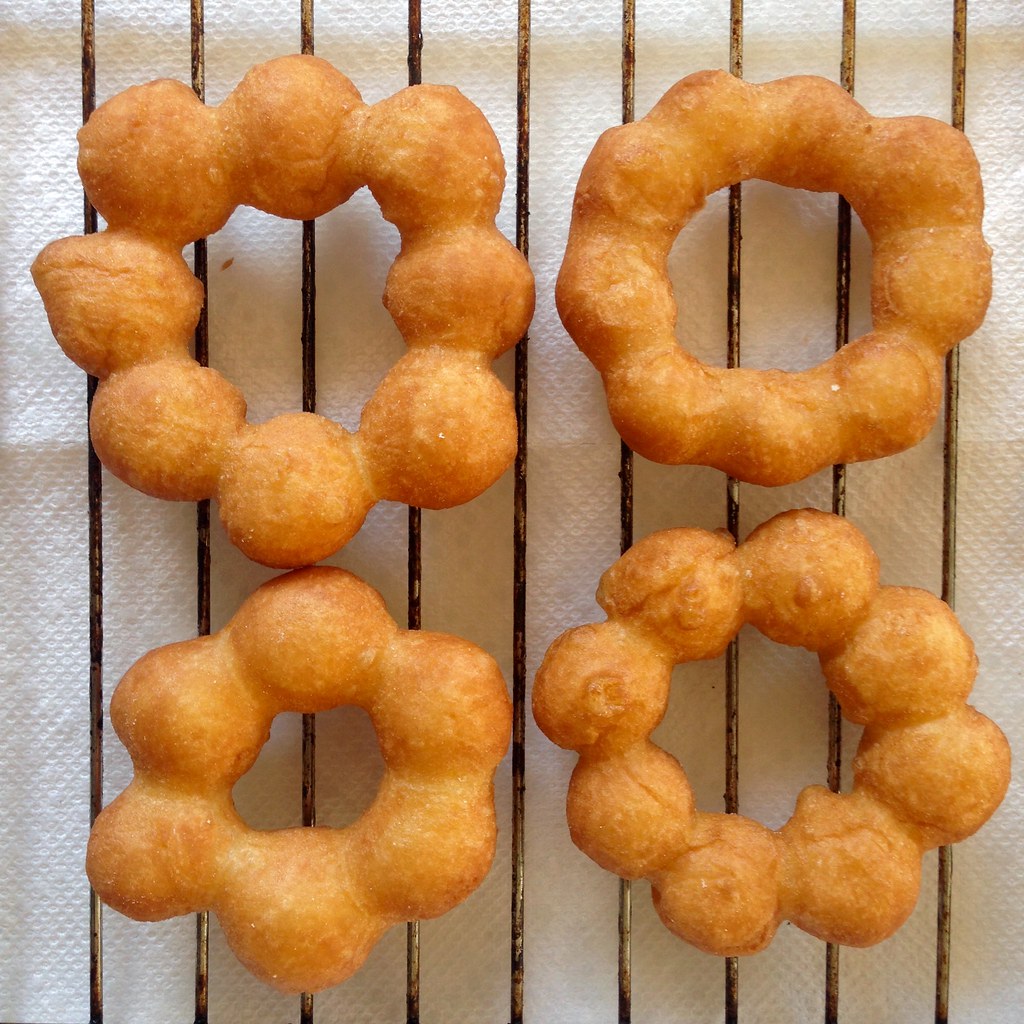 Instead of rolling the donut holes into the balls, I took the scraps left over from cutting out the regular donut shapes and rolled them into a long snake.  Then I just cut off inch-long pieces and rolled them much like I do when making tang yuan.  I found that the balls stuck together pretty well, but for extra insurance, I lightly wet them at the point that they touched each other to make sure they wouldn't fall apart when frying.  I also used the pro-tip in the comments and assembled them on a square of parchment paper.  You can place the whole thing, pon de ring and paper, into the oil and remove the paper once it's loose.  So genius! 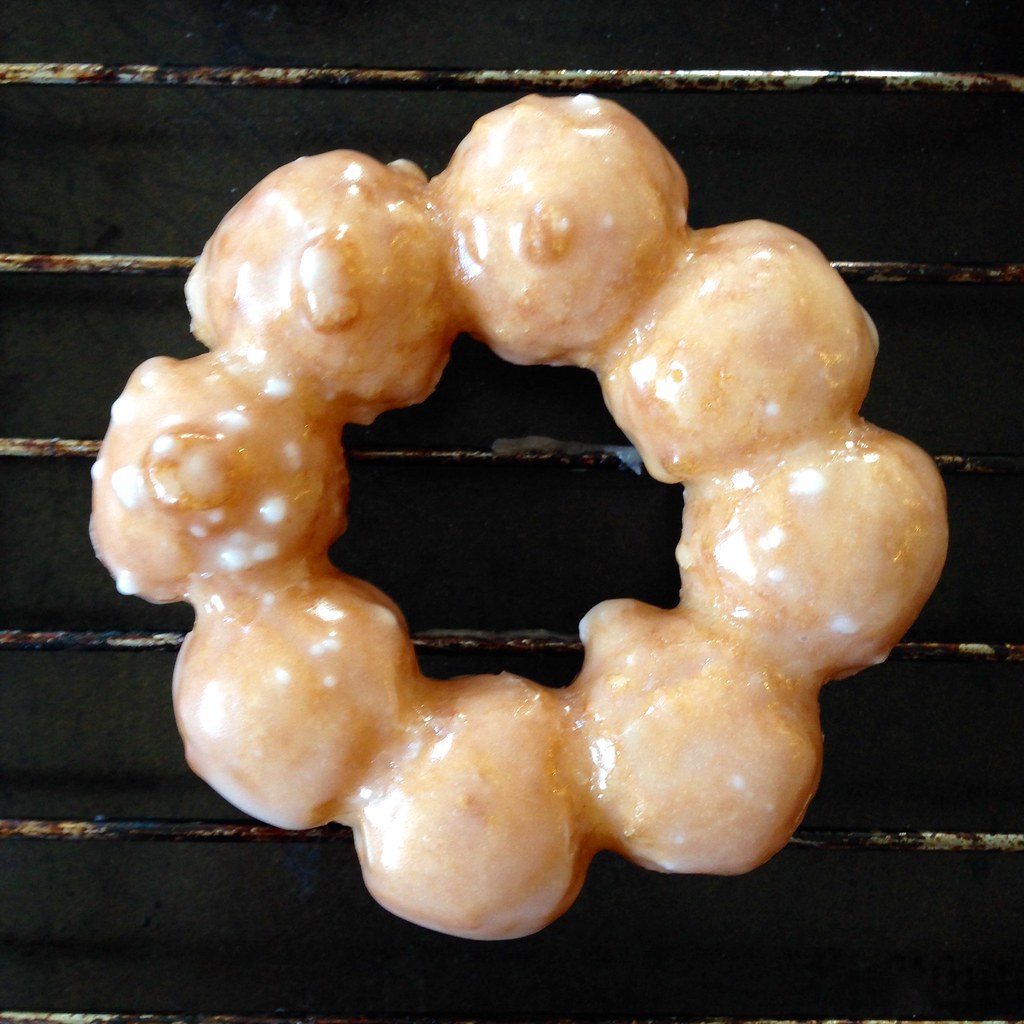 I think this may be one of the cutest things I've ever made.  It also helps to have a super talented friend named NoNo draw Pon de Lion for you so you can take a picture of the cutest donut lion ever.  ^_^  (I won't mention our other friend who couldn't be bothered to get up from the couch to see it herself and just waited for us to post the pictures to Instagram.  Although to redeem herself, she did comment that these tasted as good as they looked.) 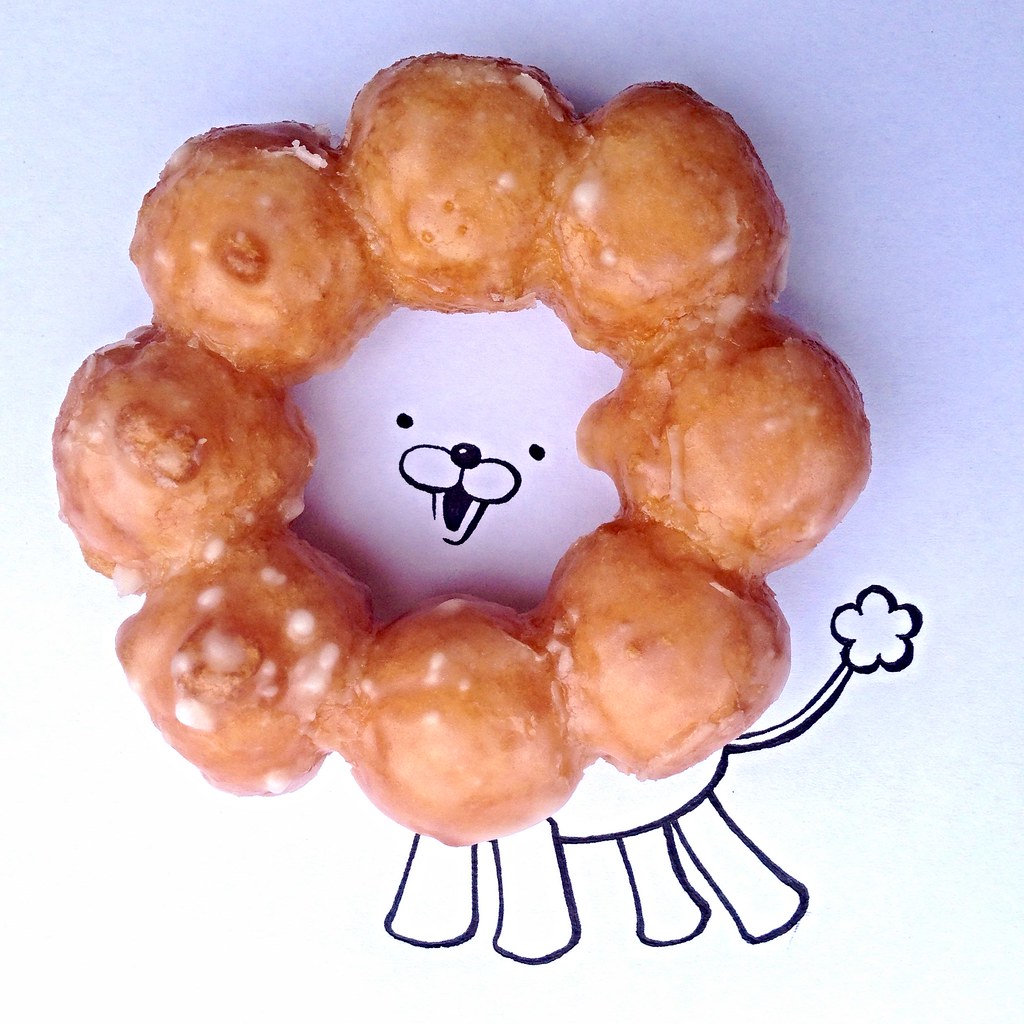 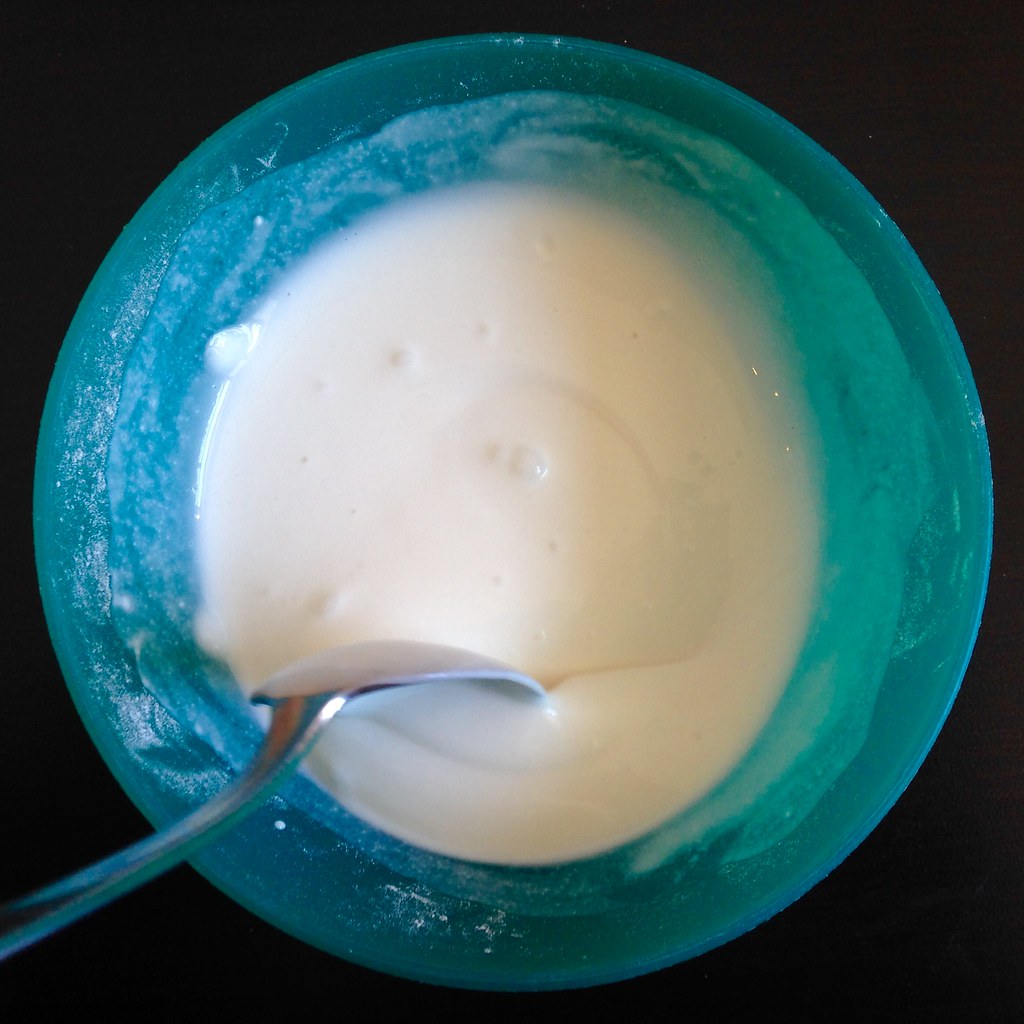 Mix 1/4 cup of the glutinous rice flour and 3 tablespoons of whole milk together in a microwave-proof bowl.  Microwave on high for 30 seconds and check to see if the dough is cooked through, which will look opaque and feel very “bouncy”.  Set aside to cool for 5 min. 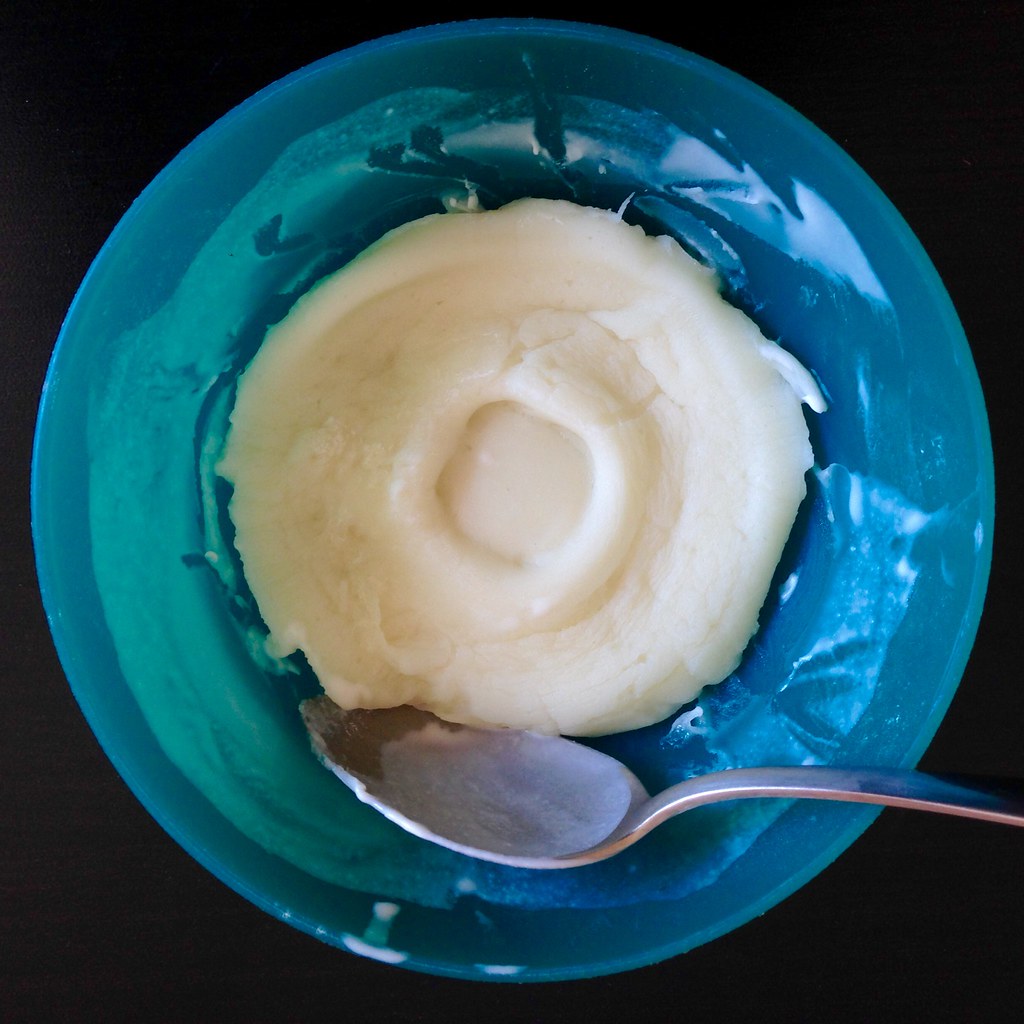 Meanwhile, add 1 3/4 cup of glutinous rice flour, 1/2 cup of milk, melted butter, granulated sugar, egg, and baking powder in a stand-mixer bowl with dough-hook.  Add the cooled starter-dough and knead the mixture on low until everything comes roughly together, then increase the speed to medium and knead until the starter dough has completely blended into the mixture. 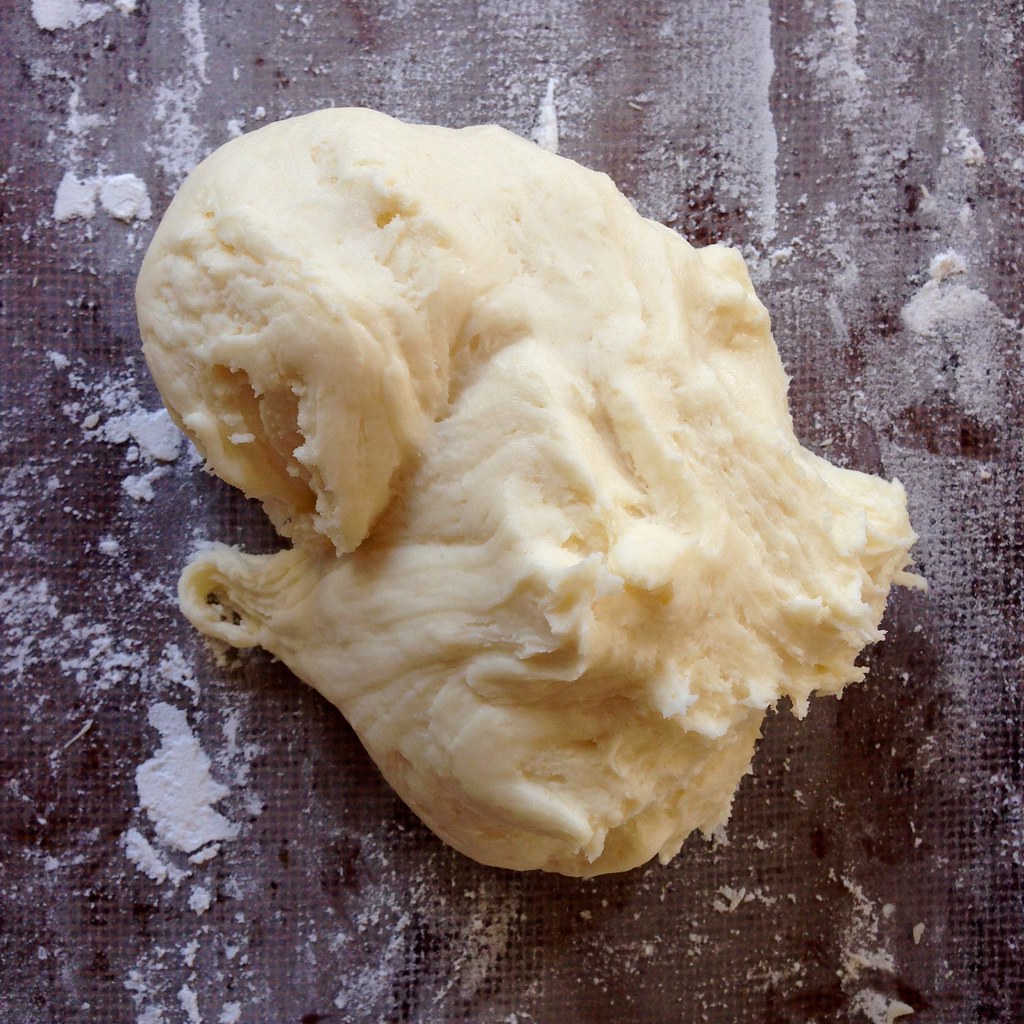 Scrape the dough onto a surface that’s dusted more glutinous rice flour.  Sprinkle just enough glutinous rice flour onto the dough to prevent sticking, then roll it to 1/2″ thick.  With a well-floured cutter, cut as many donuts out as you can (I was able to get ten 3-inch donuts using a mason jar lid ring and a water bottle cap). 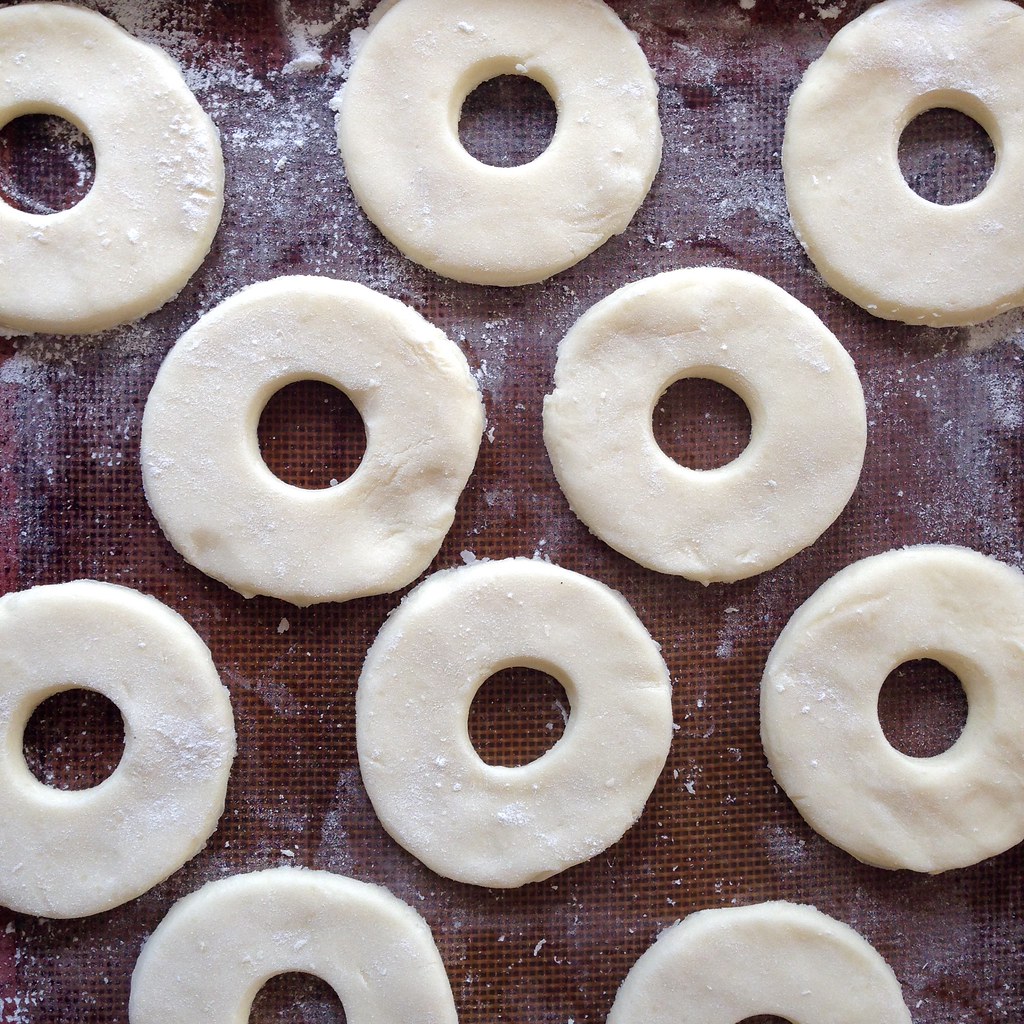 To make the pon de rings, gather the scraps, mash them together, and roll into a long snake, about 3/4" thick.  Cut the snake into 1" pieces and roll all the pieces into balls.  On pieces of square parchment paper, arrange 8 of the balls together to form a ring.  Using your finger, dab a bit of water over where each of the balls touch their neighbor.  Allow to rest while you heat up the oil.

Add enough vegetable oil to a pot to reach 1 1/2″ deep and set on medium-high heat to bring the oil to 330ºF, then turn the heat down to medium-low.  If you don’t have a thermometer, just insert a wooden chopstick into the oil; if small bubbles form around the chopstick quickly, the oil is ready.

To fry the donuts, carefully lower a few donuts into the oil; they will sink to the bottom for the first 20 seconds then float back up.  Fry for a few minutes on each side until the donuts are puffed up and golden brown.  Transfer to a cooling rack set over a tray lined with paper towels to drain. 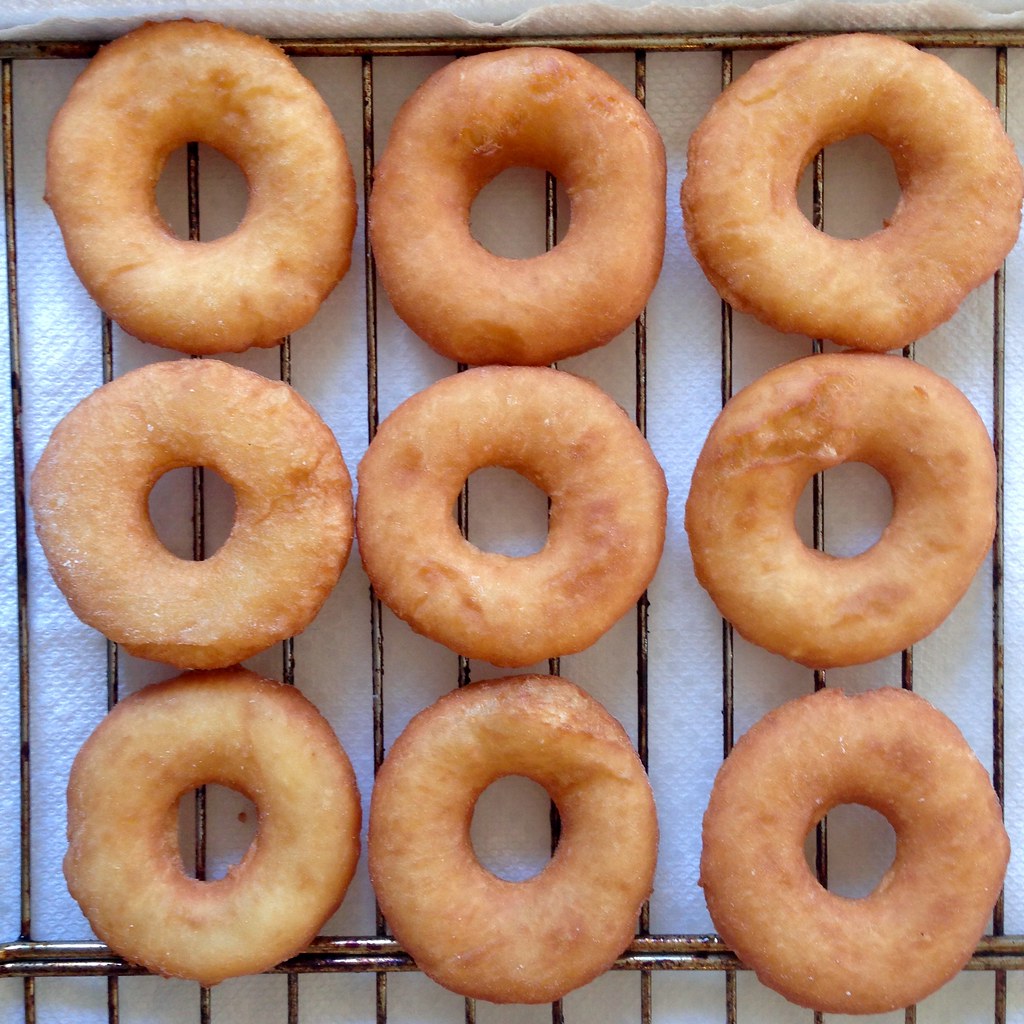 To fry the pon de rings, lower the rings along with the parchment paper into the hot oil.  After 20-30 seconds, you should be able to separate the paper from the ring.  Remove the paper with tongs and discard.  Once the rings are golden brown on both sides, transfer to the cooling rack to drain.

Mix 2 1/2 tablespoons of melted unsalted butter with powdered sugar and vanilla extract, then add 2-3 tablespoons of hot water to bring it to a desired glaze-consistency.  Dip one side of the donuts into the glaze and serve within a few hours.  (I didn't mix my glaze well enough so there were still quite a few sugar lumps in it when I dipped the donuts; I like to think of them as accidental pearl sugar decorations ;) 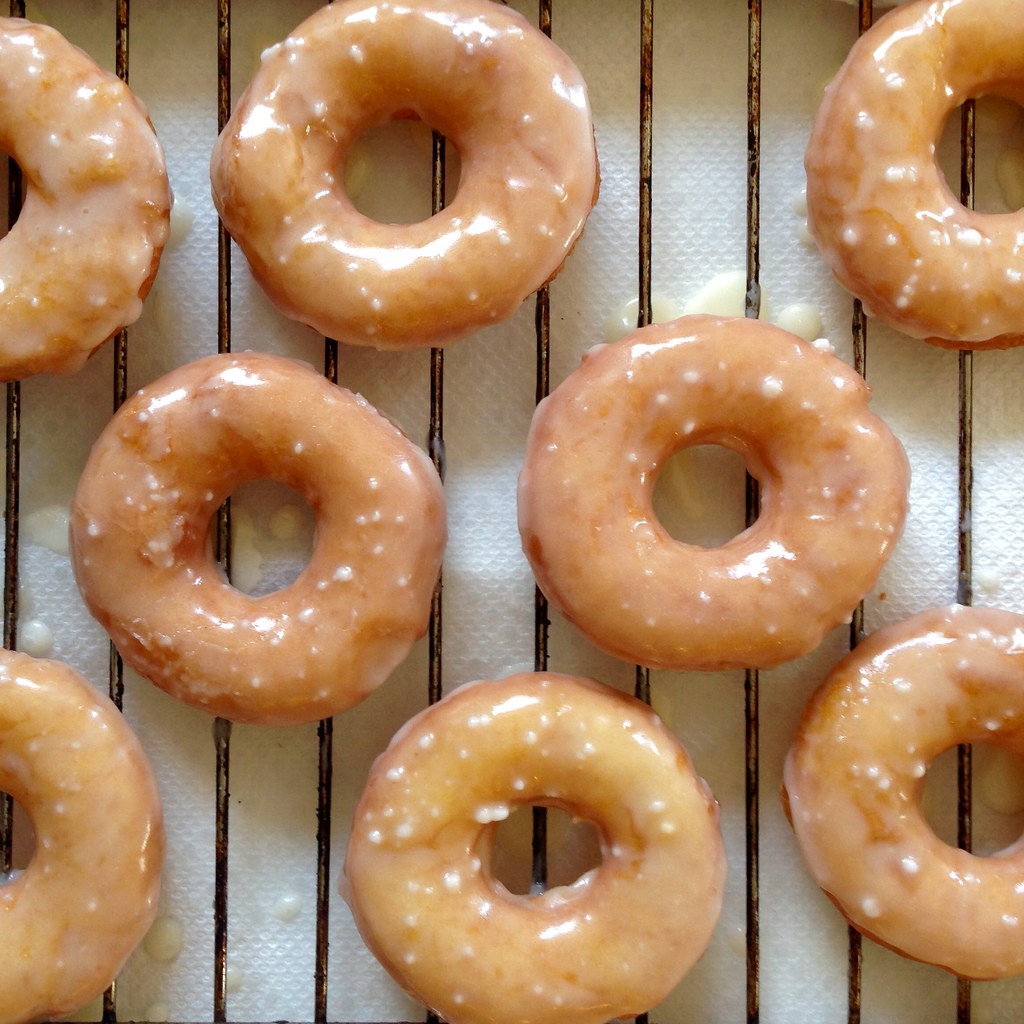 If you end up with leftovers, you should heat them up before eating so the soft, chewy texture is restored.  Ten seconds in the microwave works, but my preferred way of reheating a mochi donut is to use a waffle iron.  This way you get the chewiness but also a crispier crust.  It's like a moffle, only better! 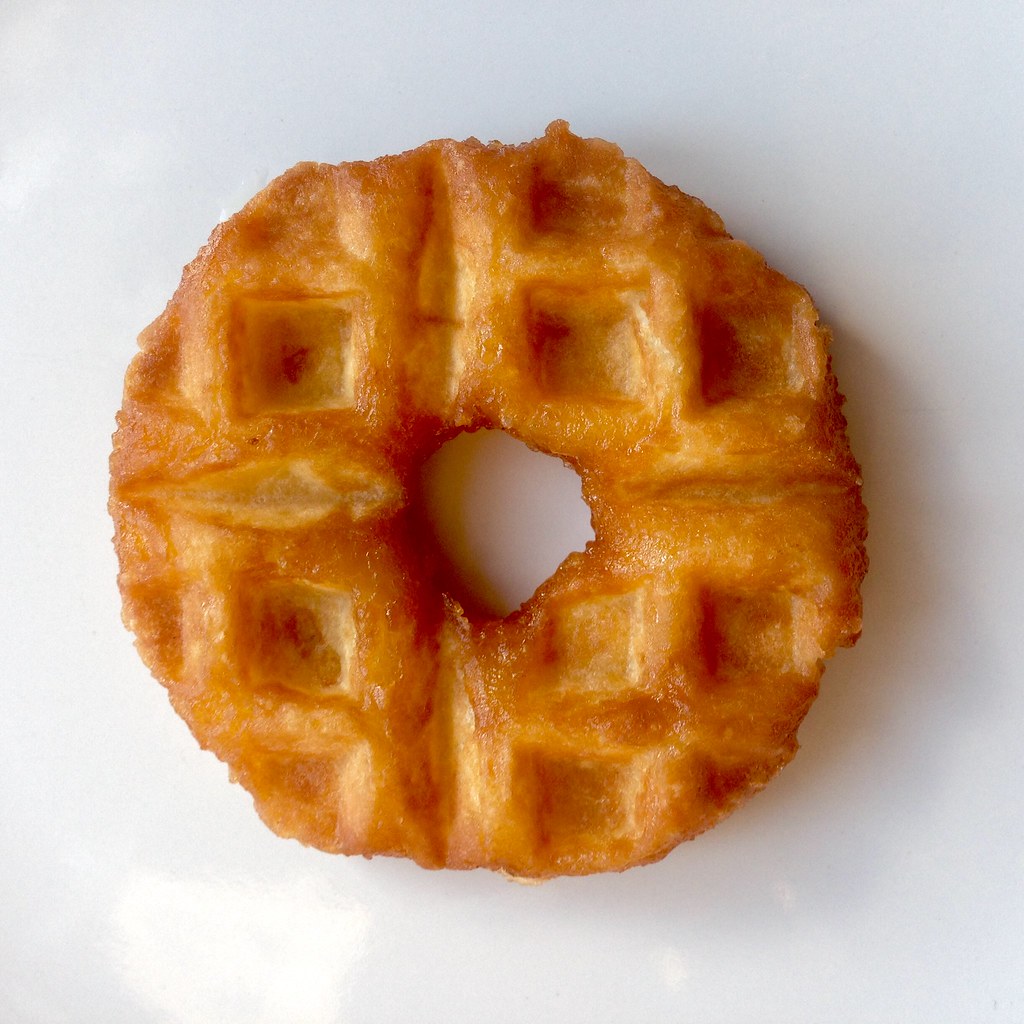