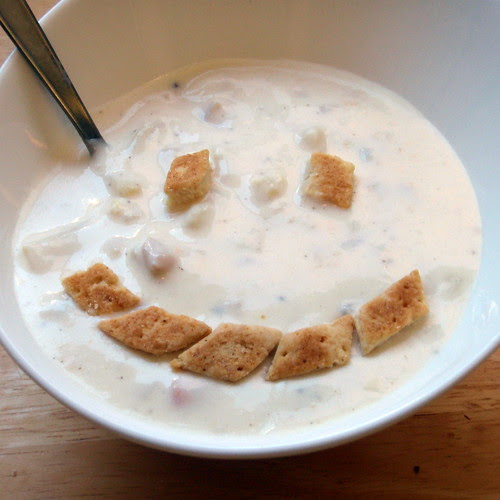 That should really be a sad face because Leslie is gone =(

My dear cousin and roommate, Leslie, moved out yesterday after 3.5 years of living together, so we threw a goodbye and birthday party for her on Sunday night. Annie and I came up with a theme of "Boston" for food so I made some New England clam chowder ("chowda" around these here parts) and oyster crackers. This was my first time making it, but I used a highly rated recipe on allrecipes.com for the chowder, and I think it turned out pretty good (at least, better than Campbells). The oyster crackers were more of an afterthought; I realized that it would be good to serve the chowder with oyster crackers but was too lazy to go to the store to get them so I figured I'd just make them myself. And now that I think about it, that's a pretty warped sense of laziness. Oh well.

I almost always go to allrecipes.com if there's something I want to make that I don't have a recipe for. I like the website because you can be assured that the recipes are good by looking for the ones that have tons of reviews and read the comments to catch any useful tips. For example, when I searched for clam chowder on the site, there were 43 returns, but only a few had more than a handful of comments, a couple had at least a hundred, and only one had 440. So of course I chose to use that recipe. And skimming through the comments gave me the idea to add bacon to the chowder to make it even more flavorful.

Brown bacon in a large stock pot until crisp. Remove bacon and set aside. Add onions, celery, potatoes, and carrots to bacon fat and toss. Drain juice from clams and add to vegetables. Add enough water to cover and cook over medium-high heat until tender.

Meanwhile, in a large, heavy saucepan, melt the butter over medium heat. Whisk in flour until smooth. Whisk in cream and stir constantly until thick and smooth. Add to the vegetables and clam juice. Heat through but do not boil.

Crumble the bacon and stir in with clams just before serving. (If the clams cook too much they get tough.) When clams are heated through, stir in vinegar and season with salt and pepper. Serve hot with oyster crackers.

I found the oyster cracker recipe using google. There were a couple of other recipes that used yeast and shortening, but I decided to keep it simple and use this one that uses butter. I considered briefly using bacon fat or duck fat, but then I decided I wanted my guests to go home alive. =P 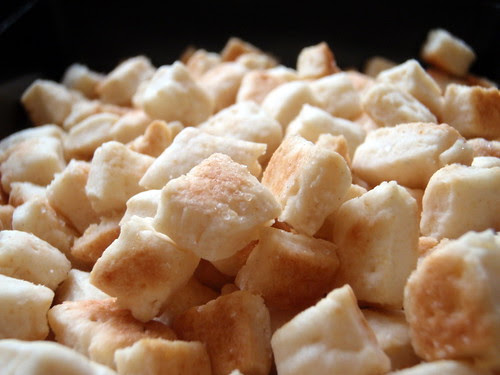 Homemade Oyster Crackers (based on this recipe)
makes about 2 cups
2 cups all-purpose flour
1 tablespoon baking powder
1 teaspoon sea salt
4 oz. unsalted butter, diced
4 oz. whole milk
Sea salt for garnish
Preheat your oven to 375 °F.
Combine all dry ingredients in food processor. Add butter and pulse quickly, until it looks like "coarse meal". Add the milk and process 3 seconds. Remove to floured surface, knead 10 seconds and chill the dough.
Divide the dough into quarters, and working with one quarter at a time (leaving the rest chilling in the refrigerator), roll the dough out to 1/8" thickness and sprinkle with salt. Using a fork, prick the dough all over. Cut with the crackers into any desired shape using a sharp knife or small cookie cutter.
Place the crackers on a cookie sheet and bake for 5-7 minutes or until light brown. Store in an airtight container once cool.
At first I wanted to try to make hexagons and figured I could cut the dough into diamonds and then lop off two opposing corners. But after I cut the dough into diamonds, the dough was too warm to work with so I just stopped there. I loved how these crackers had some real flavor thanks to the butter and didn't just taste like salty cardboard as oyster crackers too often do.
Next up: Boston cream cupcakes and mousse.
Posted by Joy at 9:18 AM