So for the longest time I thought I was allergic to avocados. I think I tried some for the first time in my early teens (my mom was making California rolls) and my stomach didn't take too kindly to it so I avoided it for years to come. Then I think I tried guacamole once and got addicted and realized my tummy was fine so I realized I wasn't allergic! Come to think of it, the only (other) allergic reactions I've ever gotten were hives after eating a spider roll (twice), although when I eat other sushi rolls and soft shell crab on its own I don't break out. And I've definitely eaten spider rolls at other times without breaking out too.

But back to this avocado. I saw avocado ice cream once at this gelato place between Chinatown and North Beach in SF and thought the idea was intriguing but went for the lychee ice cream instead. But now that I had my own avocado with which I could do anything I wanted to, I figured it was time to make some avocado ice cream.

A quick google gave me Alton Brown's recipe, and I *always* trust Alton Brown. That guy knows what he's talking about. 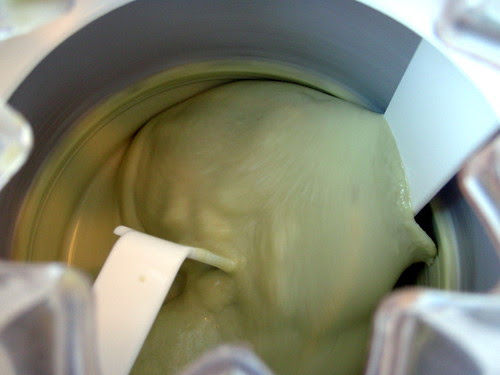 Add the avocado meat, lemon juice, milk, and sugar to a blender and puree.

Transfer the mixture to a medium mixing bowl, add the heavy cream, and whisk to combine. Place the mixture into the refrigerator and chill until it reaches 40 °F or below, approximately 4 to 6 hours.

Process the mixture in an ice cream maker according to manufacturer's directions. However, this mixture sets up very fast, so count on it taking only 5 to 10 minutes to process. For soft ice cream, serve immediately. If desired, place in freezer for 3 to 4 hours for firmer texture. 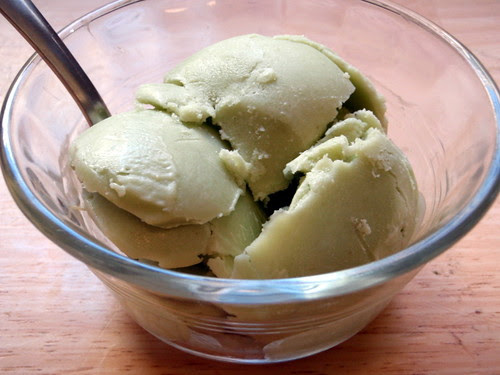 When I tasted the unfrozen mixture, I understood for the first time that the avocado is a fruit. The sugar and squeeze of lemon juice gave the avocado a tanginess similar to that of the kiwi but without the sharp acidity of that other green fruit. And the texture, oh my, the creaminess.... It was creamier than any ice cream I'd ever tried; it was basically like eating a very, very cold avocado without any iciness involved. Words fail to describe it. You'll simply have to try it for yourself because this recipe only made enough for me. ^_^
Posted by Joy at 12:59 PM