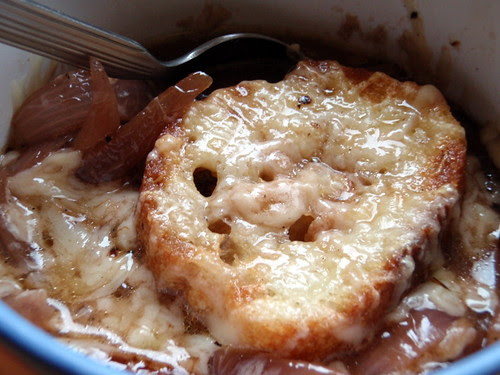 My first encounter with French onion soup came after my family had moved to Ohio when I was 13. We were staying at a hotel until we could find more permanent housing, and as a treat, my parents chose to eat at the hotel restaurant for dinner. Back then, going to McDonald's was still a special thing for me, so this was probably the first sit-down meal I had where a waiter served me and everything. My mom ordered the French onion soup, and when she let me try some, it was love at first bite. The melty, salty cheese and not yet soggy bread crouton floating on top of the beef broth and sweet onions was the undoing of me. If such a thing existed in this world, then I was all the more glad to be living in it.

Fast forward to my undergrad days at Cornell. At the Ivy Room, one of the a la carte dining halls, they served French onion soup every day. Of course, being on meal plan, it didn't really make sense for me to be eating there because I could have been getting all-you-can-eat at Oakenshields next door, but that didn't stop me from going to the Ivy and getting my favorite soup at least once a week. Unfortunately, by my junior year, they had stopped serving it there, although they had started making paninis, which is how I had my first Cubano, but that's another story for another day.

I've never made French onion soup myself because the usual recipes call for beef broth, baguette bread, and cheese, which are 3 ingredients I don't usually have in my fridge or pantry. But then I ended up with 2 red onions from Boston Organics which I didn't know what to do with and in the same week, came across this recipe for French red onion soup from the September 2008 issue of Gourmet, which uses chicken broth instead of beef broth. I already had all the ingredients except for the baguette and Gruyere, but I figured just this one time I could shell out for them, and boy, am I glad I did. 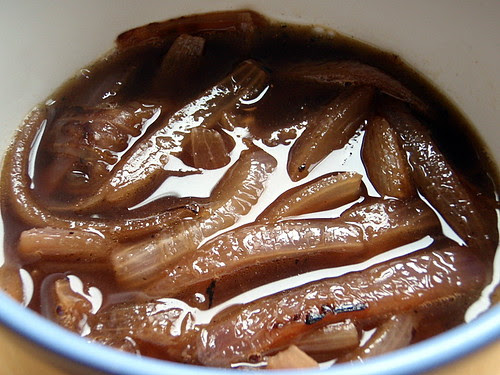 French Red Onion Soup (based on this recipe)
makes 4 servings

Meanwhile, cook onions in oil with 1/4 teaspoon salt in a heavy medium pot over medium heat, covered, stirring occasionally, until deep golden, about 15 minutes. Add wine and boil, uncovered, until reduced to 2 tablespoons, about 1 minute. Strain broth through a sieve into onion mixture and briskly simmer, uncovered, 10 minutes. Season with salt. 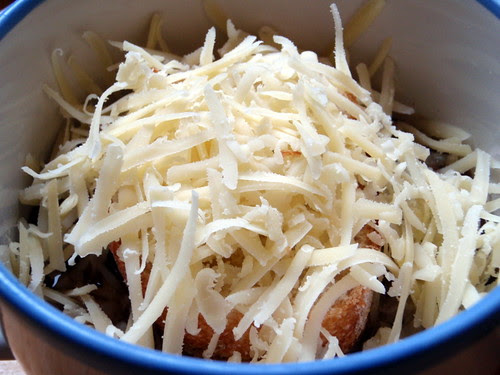 Ladle soup into 4 ovenproof bowls set in a 4-sided sheet pan. Place baguette slices on top and sprinkle each with 1/2 cup cheese. Broil about 6 inches from heat until cheese is melted and bubbling, about 2 minutes. 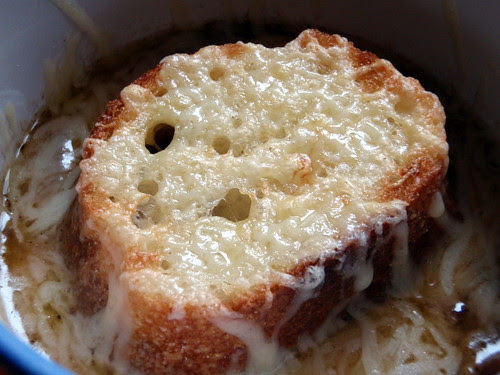 I wish I had oven-proof bowls that were closer in diameter to the size of the baguette slice for aesthetic purposes. For gastromic purposes, it didn't really matter as the cheese that melted on top of the soup stayed nice and melty while the cheese on top of the bread protected it from getting too soggy. This particular recipe had a bit more onions in the soup than I prefer, but the taste of the soup itself was sublime. I couldn't even tell that it came from a chicken stock and not a beef broth, that's how much depth and body the caramelized onions, spices, and reduced red wine gave the soup. 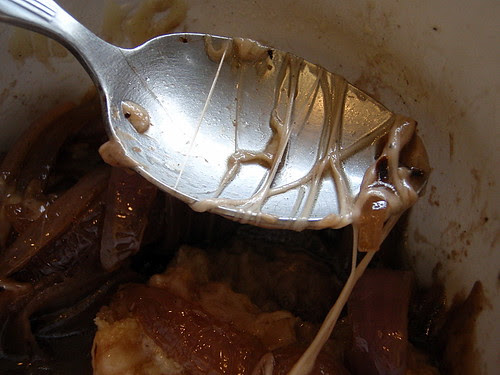