I know I promised the matcha mochi cupcake recipe next, but apparently today is National Ice Cream Sandwich Day (who knew?)!  So I'm going to take a little break from the Japan Night menu and bring you one of my latest creations. 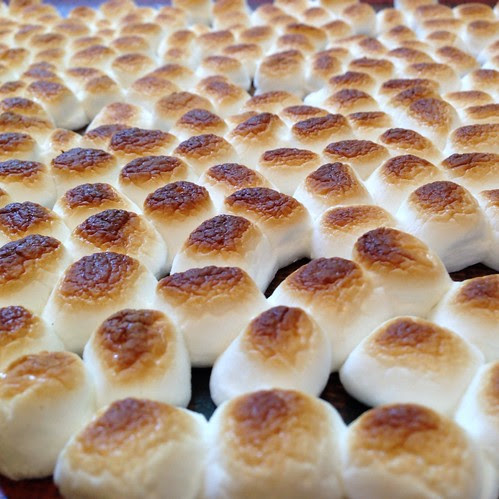 I found this recipe on Baking Bites for marshmallow ice cream that doesn't need an ice cream maker, so really anyone can make this!  I did take the extra step of toasting the marshmallows in the broiler first to try to make it taste a little more like a classic campfire s'more.

As a warning, this is not a quick and easy recipe; I'd consider it more of a labor of love.  I did cheat a little and use a brownie mix instead of making the brownies from scratch, but I think you'll be able to forgive me.  =) 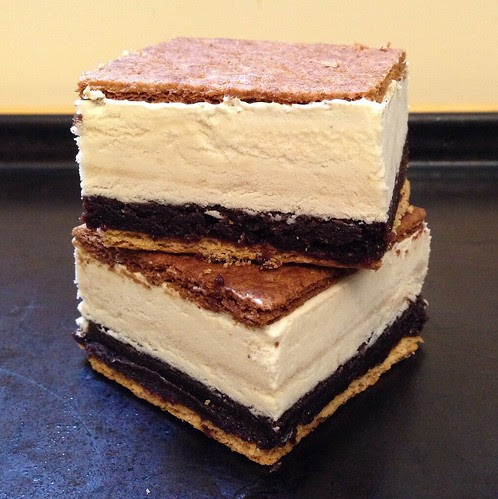 Turn the broiler on in your oven. Line a baking sheet with a Silpat, foil, or parchment paper.  Spread the marshmallows out in a single layer. 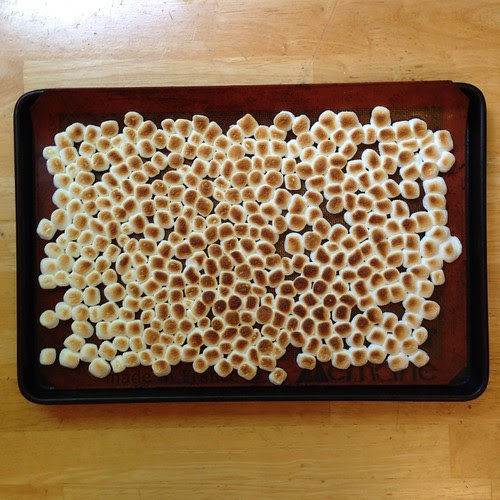 Broil the marshmallows for 1 minute or until nice and toasted.  Remove from oven and chill in the freezer so that it is easier to remove from the baking sheet.  Reduce the temperature in the oven to 350°F. 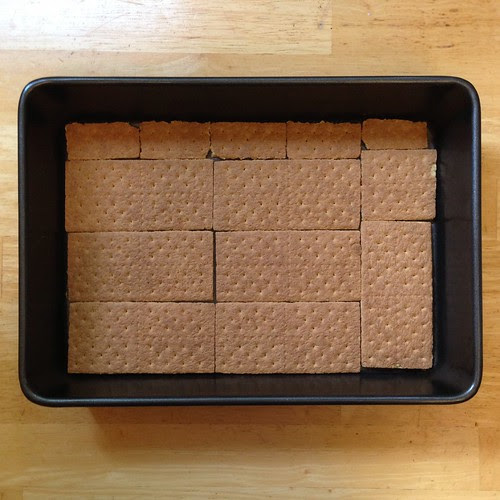 In the meantime, carefully break the graham crackers into squares.  Spread them out on the bottom of a 9"x13" pan and a 9"x9" pan to make sure you have enough to cover the surface area twice.  You may have to break up some of the squares to make them fit.

Remove the graham crackers and line the bottom of the two pans with parchment paper.  Spray with cooking spray.

Pour a little more than half the brownie batter into the larger pan and the rest into the smaller pan.  You want to try to get the same thickness in both pans. 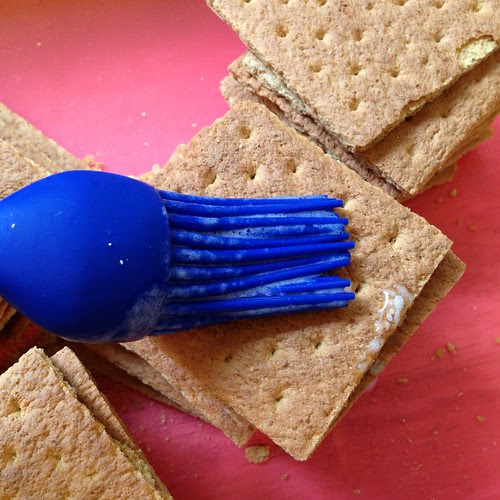 Brush both sides of the graham crackers with the melted butter and cover the bottom of the two pans with half the crackers.  Place the rest of the crackers onto another baking sheet. 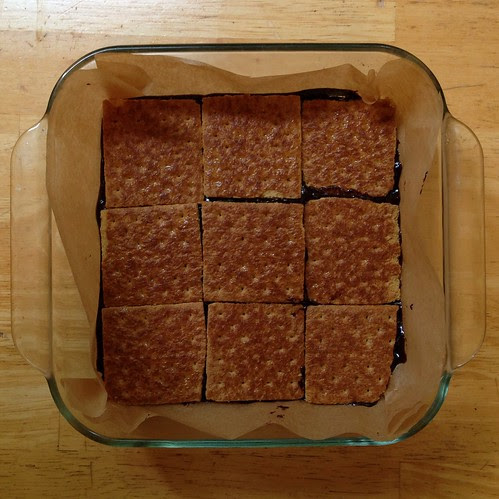 Put the two brownie pans on the middle rack of your oven and the sheet with the graham crackers on the lower rack.  Bake for 10 minutes and start checking to see if the brownies are close to done.  You want them to still be a little gooey (they will continue to cook once out of the oven and set upon cooling) but not raw and liquidy.  Once the brownies are ready, remove all the pans and the sheet from the oven and allow to cool.  After ten minutes, move the brownies to the freezer to chill for at least 30 minutes. 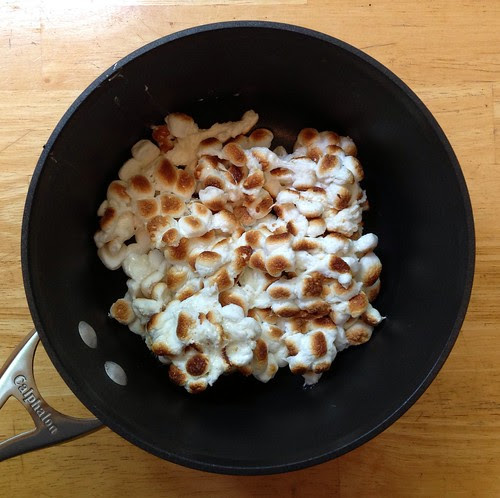 While the brownies are chilling, place the toasted marshmallows in a medium pot and add the milk.  Cook over medium-high, stirring regularly, until the marshmallows melt into the milk.  Remove from heat, stir in vanilla extract and allow to cool. Chill until cold. 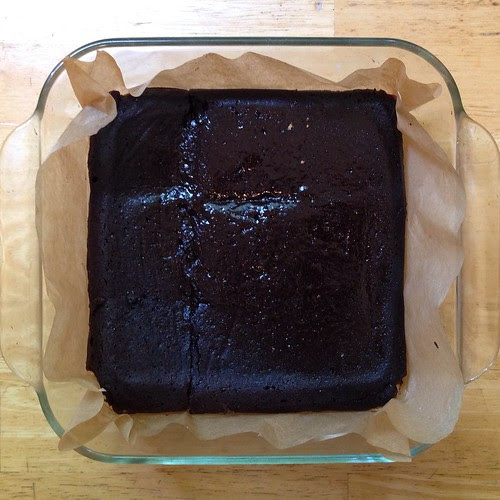 Take the brownie-cracker pans out of the freezer. Lift and peel the parchment paper to remove it from the pan. Then, line the pan again with parchment paper and invert the brownie and cracker back into the pan so that now, the cracker-layer is facing down and lining the pan. If you have trimmed/uneven cracker, take note of which sides the uneven crackers are. You’ll want to match the top and bottom layer so you can make even cuts later. 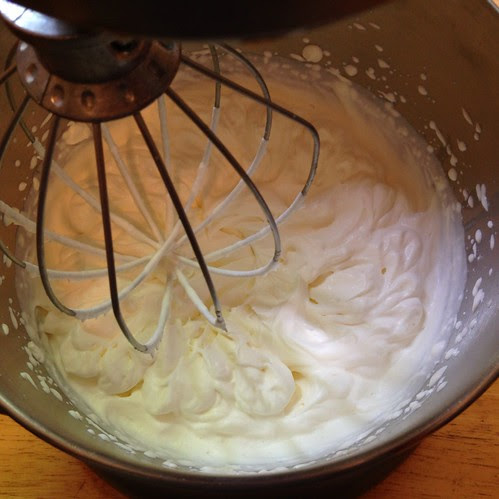 When marshmallow mixture is cold, beat whipped cream to soft peaks and fold into the marshmallow base. 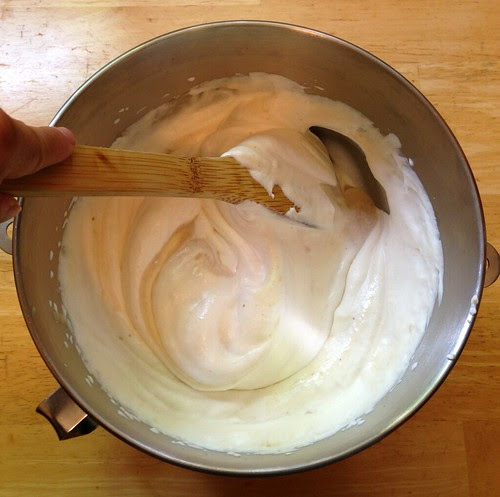 Pour the ice cream batter on top of the brownie and smooth the top with a spoon. 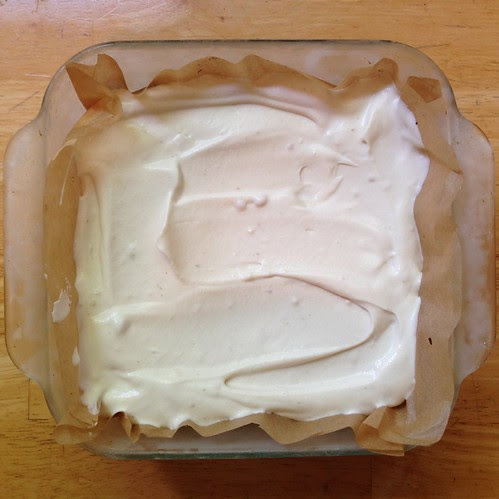 Arrange the crackers on top of the ice cream batter, making sure that the cracker arrangement matches the bottom cracker-layer (the uneven cracker pieces should be on the same side of the pan). 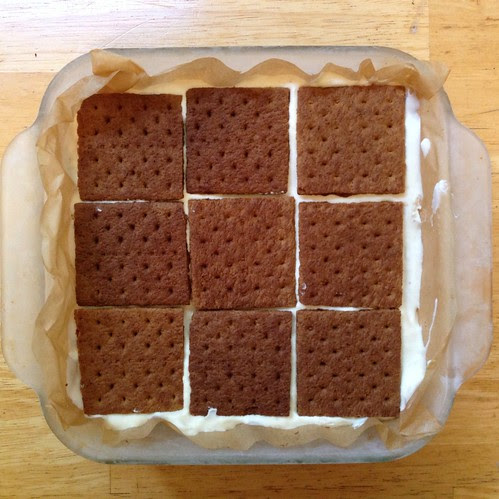 Move the pan back into the freezer to harden, at least 8 hours to overnight. 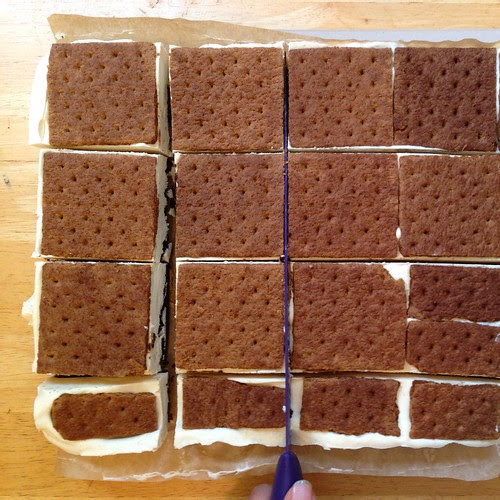 Cut between each crackers into little sandwiches. Wrap each with plastic wrap and store in the freezer. 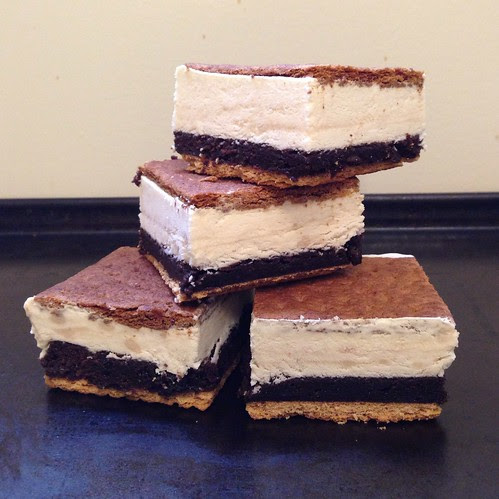 The texture of the toasted marshmallow ice cream was different from the churned ice creams I'm used to; it was a lot more airy and less creamy.  Normally I probably wouldn't have liked that, but I for this particular ice cream sandwich I think it works really well because it reminded me of a real marshmallow!

Next:  Matcha Mochi Cupcakes
Previously:  Cold Soba Noodle Salad with Baked Tofu and Edamame
Posted by Joy at 8:16 AM