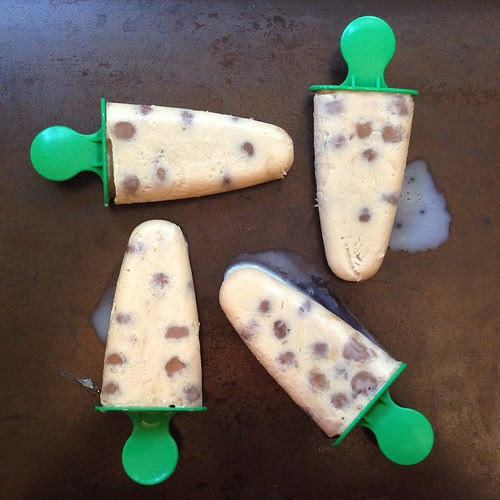 When Ilene first posted about these boba tea ice cream bars, I totally wanted to try to make it.  But I didn't have any popsicle molds at the time, so I tried just making a milk tea ice cream and folding in syrup-soaked boba.  Unfortunately, after hardening the ice cream in the freezer, the boba ended up way too hard for the ice cream to be palatable. 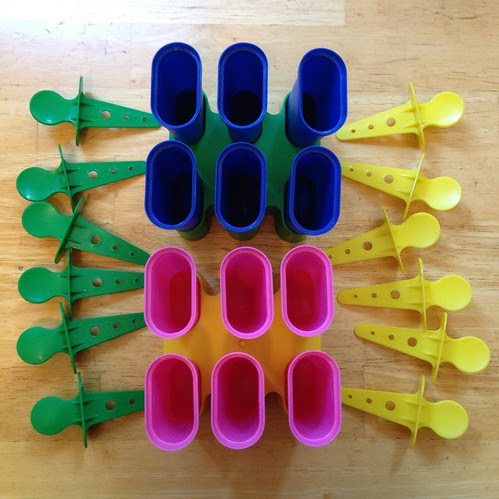 Now that I do have popsicle molds, I was looking up recipes for a milk tea popsicle the other day and came across this recipe for milk tea with tapioca pearl ice pops.  I knew it was time to try again. 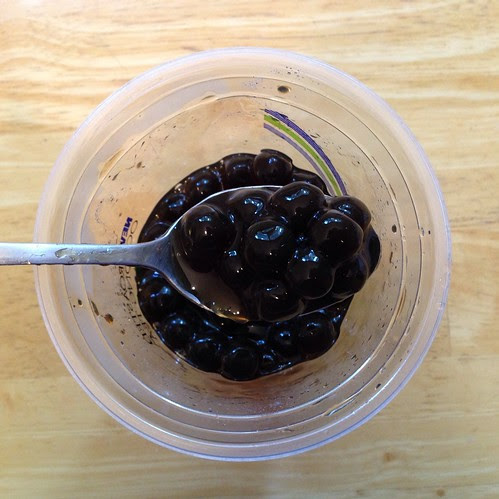 When I went to my closest Asian grocery store, they didn't have any of the par-cooked, vaccum-sealed black tapioca balls, only the kind that were completely dried.  I didn't really feel like reconstituting the boba from scratch, so I did the next best thing and went to the Lollicup in the food court and asked if I could buy just the boba.  They were really nice about it and sold it to me for the same price as a cup of bubble tea. 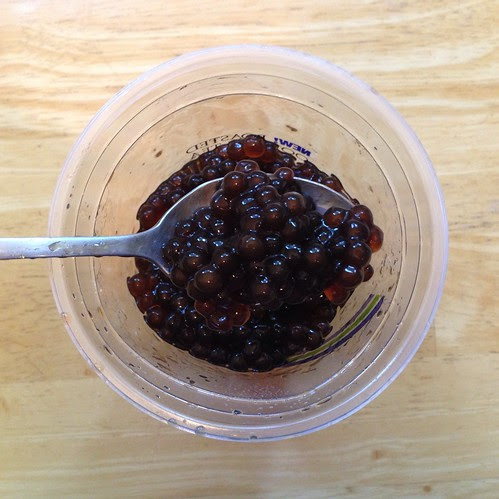 They asked if I wanted the regular-sized boba or the mini ones, and since I didn't really know if one would work better than the other, I just asked for a half cup of both.  They also offered to add some extra syrup in the cups so that the boba wouldn't stick to each other, something I would've asked them to do anyways.

The recipe has you freeze the bubble tea in two layers, presumably because the boba would float or sink in the liquid so by freezing in two layers you would get a better distribution along the whole length of the popsicle.  (Spoiler alert:  they float, at least in this particular mixture.)  Since I was filling twelve popsicle molds, I decided to fill four with all regular-sized boba, four with mini-sized boba, and four with mini on the bottom and regular on the top, kind of like a gradient. 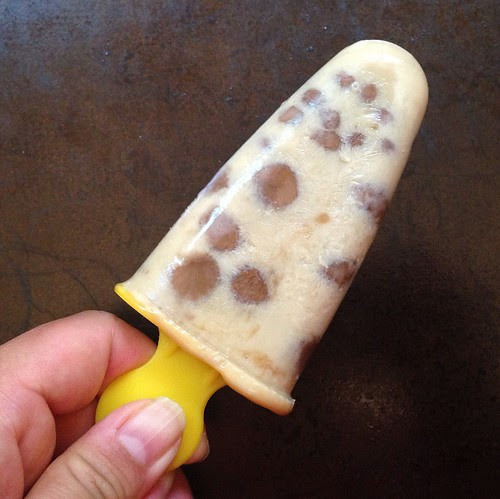 After freezing and eating the popsicles, there was a clear winner between the two sizes.  Just like before, the regular-sized boba ended up being too hard, but the mini-boba stayed nice and chewy!  Success! 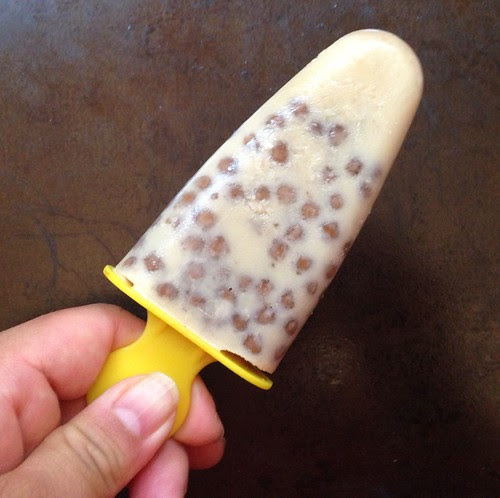 Bring the water to a boil over medium-high heat in a small saucepan with a tightfitting lid. Add the tea bags, stir to combine, and return to a boil. Reduce the heat to medium low and simmer for 5 minutes. Remove the pan from the heat, cover, and let sit for 10 minutes. 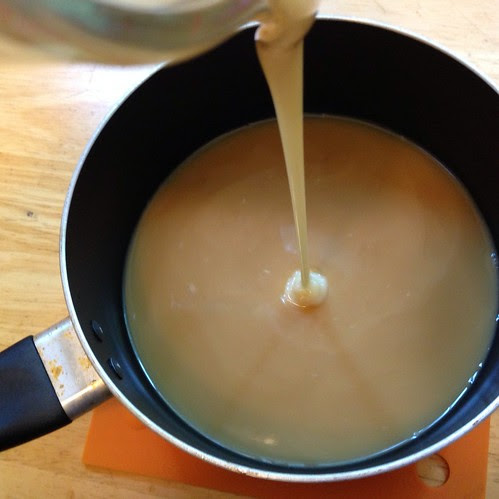 Remove the tea bags or tea sock, pressing the extra liquid from the bags or sock back into the pan, and discard the tea bags. Add the condensed milk and whisk until evenly combined. 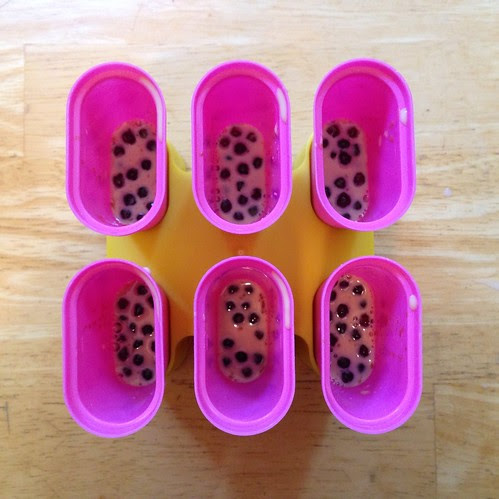 Using a slotted spoon, remove 1/3 cup of the pearls from the syrup and divide them among the pop molds. Fill the molds halfway with the milk tea base. Stir the boba around in the milk tea to make sure that there aren't any large clumps.  Freeze until the pops are almost solid, about 2 hours. Meanwhile, set the remaining pearls aside in the syrup at room temperature. Place the remaining milk tea base in the refrigerator. 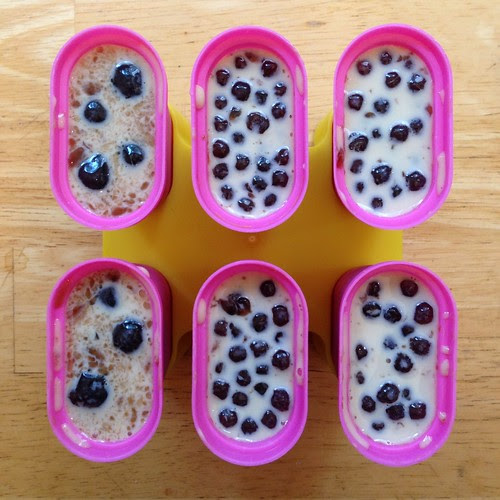 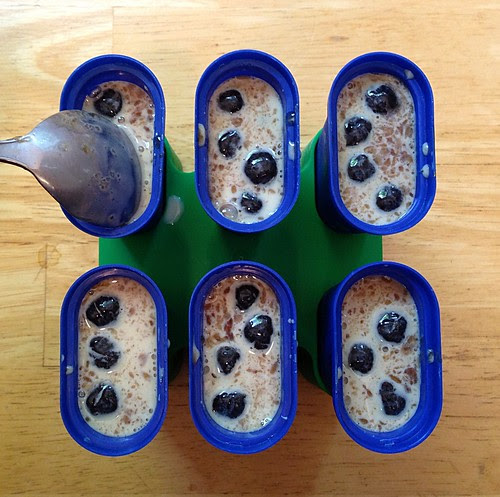 Stir the boba again to break up any clumps.  Insert the sticks and freeze until solid, at least 6 hours. 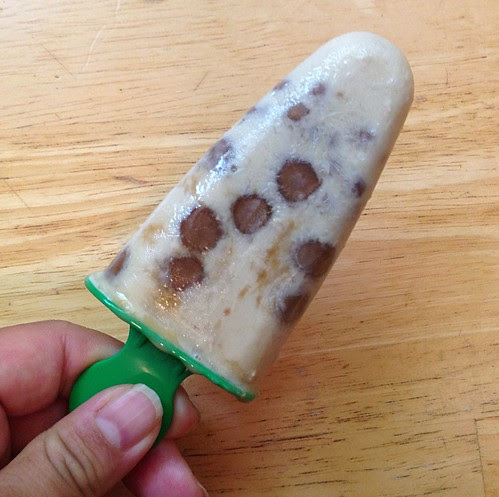 I wasn't as enamored with the milk tea part of the popsicle.  It was a little too sweet and icy for me.  If I had to do it again, I might just freeze some straight up milk tea (maybe with a little more half & half added to it) if I wanted a popsicle or churn some milk tea ice cream with mini boba and use that to fill the popsicle molds for a bubble tea ice cream bar.