I had my mac and cheese post all ready to go, but it's just way too hot today to think about turning on the oven or the stove.  So here's another post I've been working on that seems a better match for today's weather. 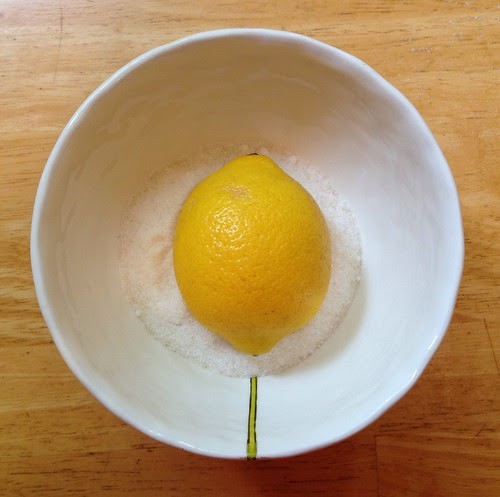 A couple of weeks ago, Food52 posted a video to show how to make The Best Lemonade You've Ever Had.  Strangely, there was no recipe attached, just a method involving rubbing the lemons in the sugar to scent them before making a simple syrup out of the sugar.  You had to dig into the comments to find that they recommend using equal volumes of lemon juice and simple syrup and that the simple syrup was made with equal volumes of the lemon scented sugar and water. 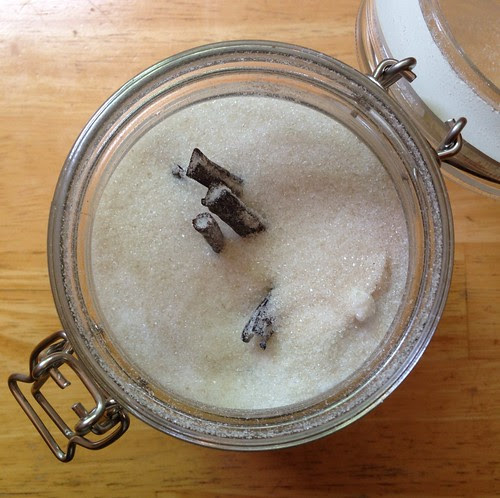 I tried the method, and on a whim, decided to use vanilla sugar* instead of plain sugar.  Wow.  This was definitely the best lemonade I had ever had.  It's been over a week since I made it, and I've made it several times since then, but I still can't put into words what makes it so great.  The vanilla just elevates the lemonade to another level but in a subtle, understated way. 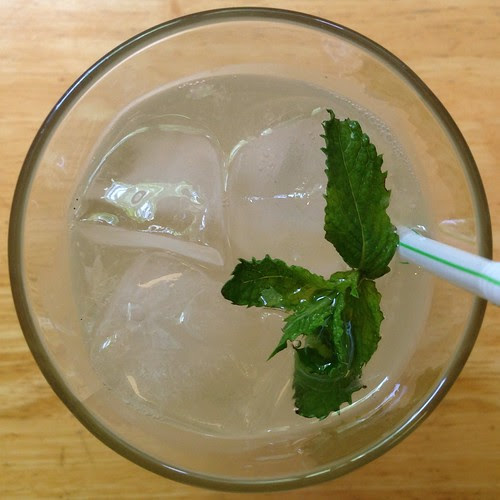 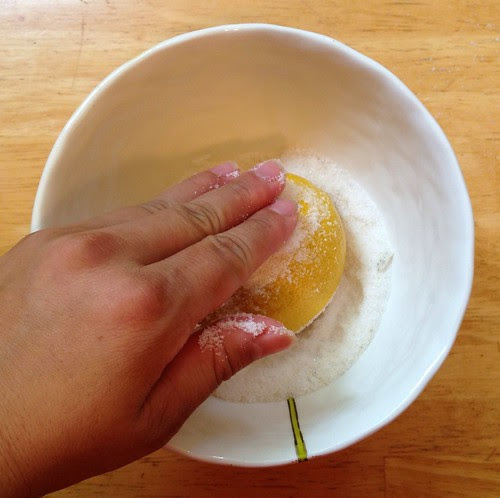 Place the sugar in a wide bowl.  One at a time, rub the outside of the lemons with the vanilla sugar.  Wipe off any sugar that remains on the lemons back into the bowl. 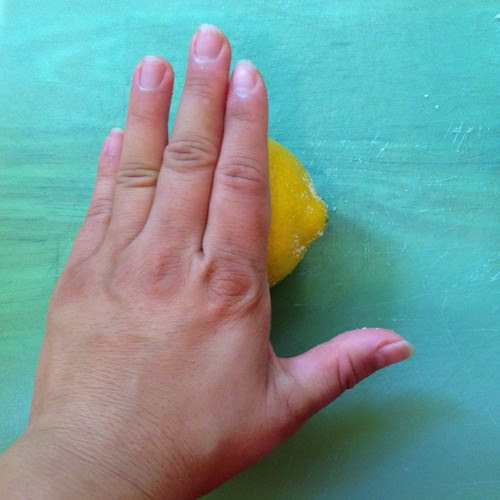 Roll the lemons on a hard surface to make juicing easier.  Slice the lemons in half and juice into a measuring cup.  I was able to get a little more than half a cup of juice. 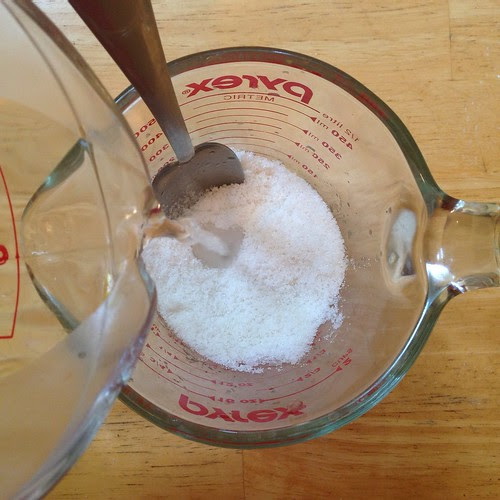 Add more sugar if you want to match the volume of lemon juice.  Add an equal volume of hot water to the sugar and stir until dissolved to make a simple syrup. 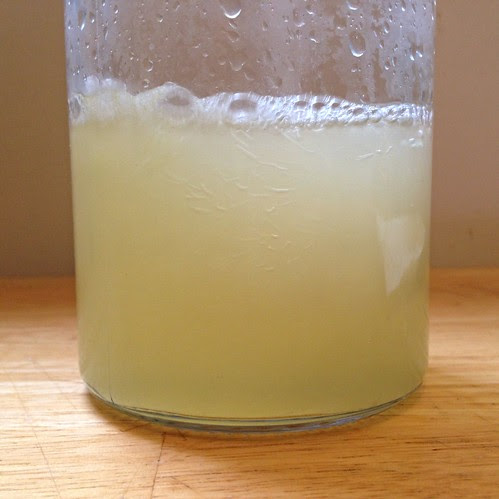 Add the lemon juice and simple syrup to a pitcher or bottle.  Dilute with enough cold water to taste.  I add about 4 parts cold water to 1 part lemon juice/simple syrup solution.  It's still just the tiniest bit too strong for me to drink straight up but perfect once you add a few cubes of ice.  =) 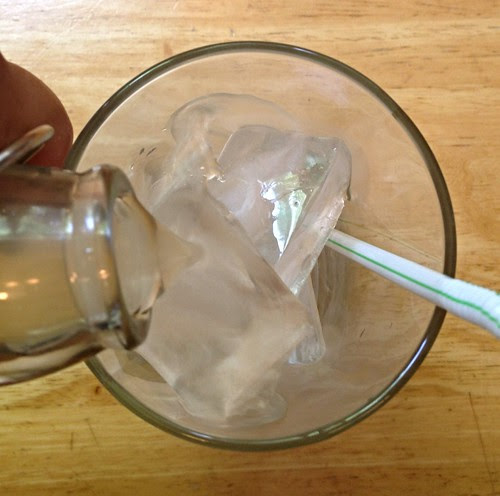 *To make the vanilla sugar, I've been adding the spent vanilla bean pods to an air-tight container of sugar every time I make something that uses fresh vanilla beans.  After letting it sit there for a few days, the sugar absorbs the scent of the vanilla and becomes vanilla sugar!  You can use it in just about anything sweet:  cookies, cakes, ice cream, etc. 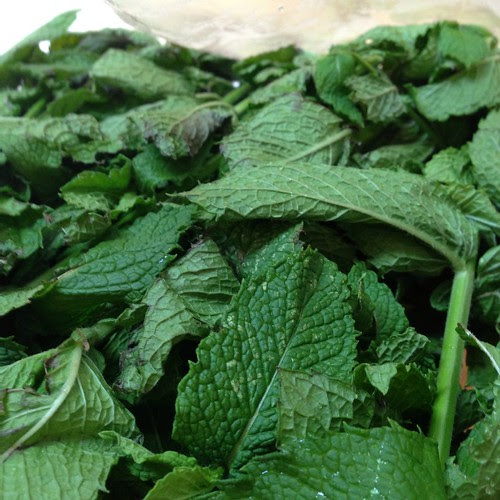 Then a couple of days ago I get a text from my friend Paula asking me if I wanted any of the mint she and her family had just picked from their backyard!  I immediately accepted even though I wasn't sure what I would do with it yet.  Then when I was making my third batch of lemonade in probably as many days, I started wondering if maybe I could rub the mint with the sugar and add some mint flavor to the lemonade that way. 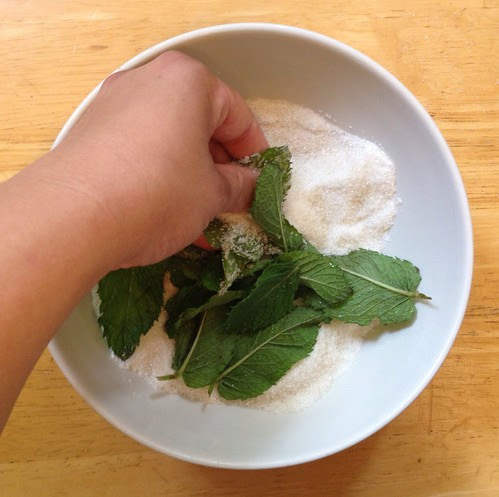 So after rubbing the lemons in the sugar, I dropped in a handful of mint leaves and rubbed those all around.  I left the leaves in the sugar while pouring the hot water in and let it steep for a bit before straining out the leaves.  I found that I was able to extract a lot of the mint flavor this way without having to leave the mint leaves in the actual lemonade.  And if you really like the taste of mint, I'd recommend tearing the mint leaves up before adding them to the sugar to release even more oils. 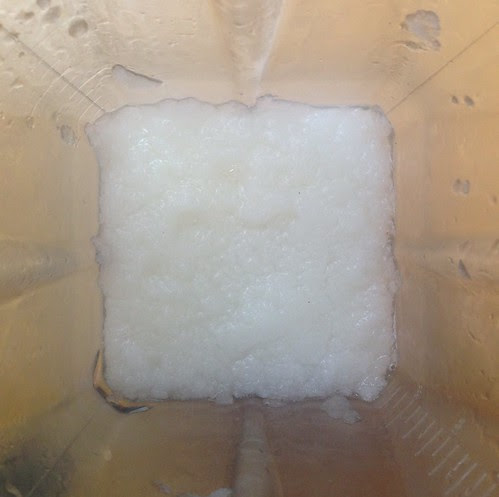 To take it one step further, I decided to blend the mint lemonade with some ice to make a mint lemonade slushie, inspired by Ilene's post. 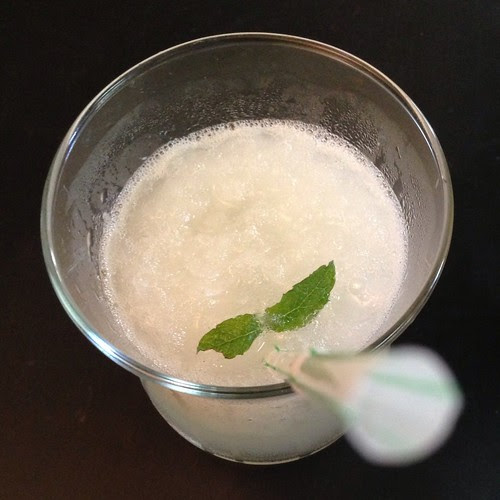 Next:  Martha Stewart's Perfect Macaroni and Cheese
Previously:  French Toast Face Off
Posted by Joy at 9:01 AM