Last year for Valentine's Day I celebrated by making jjajungmyeon (Korean black bean noodles).  This year, I stayed with the color scheme but went Italian and made squid ink spaghetti aglio e olio, inspired by my trip to Venice. After our time in Rome, my cousin Leslie and I took the train up to La Serenissima.  Despite being colder and rainier than Rome, Venice was amazing.  At just about every bridge we crossed, I felt like I had to stop and take a picture; it was so picturesque! We spent the first half of our trip either using the complimentary hotel shuttle boat to St. Mark's Square or trudging through the rain on foot to get around.  The city wasn't that big, so we were able to see St. Mark's Basilica, the Doge's Palace, the Accademia, and Rialto Bridge pretty easily this way. It wasn't until we decided to get a pass for the vaporetto (the public water bus), though, that I really began to feel like more than just a tourist.  At last we were able to see Venice from the Grand Canal as it was meant to be seen.  It didn't hurt that we were usually surrounded by locals commuting back and forth from work, either. While scouring the grocery store on the last day for edible souvenirs to bring home, I found a package of spaghetti al nero di seppia, or squid ink spaghetti.  I had ordered spaghetti with cuttlefish ink sauce a couple of times in Venice a couple of times and really enjoyed it, so I decided to buy the pasta and try to make it at home.  Unfortunately, I haven't been able to find any actual squid or cuttlefish ink to make the sauce with, although in my search I did find squid ink pasta at a local Italian store, so you probably don't have to go all the way to Venice to find the pasta.  Without any ink, I decided to prepare the pasta simply, aglio e olio, with garlic and olive oil and a pinch of red pepper flakes.  This recipe is even easier than spaghetti carbonara and you're almost certain to already have all the ingredients (you can use regular spaghetti if you don't have any squid ink pasta). Bring a pot of salted water boil.  Add the spaghetti to the pot and cook according to the packaging (mine says to cook for 10-12 minutes).

In the meantime, add the olive oil and sliced garlic to a small saucepan and set on low heat.  Once the garlic starts to sizzle, add the red pepper flakes and sea salt to taste.  Continue to heat while the spaghetti is cooking, but do not allow the garlic to brown.  If this starts to happen, remove the pan from heat.

When the spaghetti is done cooking, use a pasta scooper to add it to the saucepan.  You want a little bit of the pasta water to go along with it so don't worry about draining it first.  Toss the spaghetti with the olive oil until it is well coated.  Plate and garnish with some chopped parsley or basil.  Serve immediately. 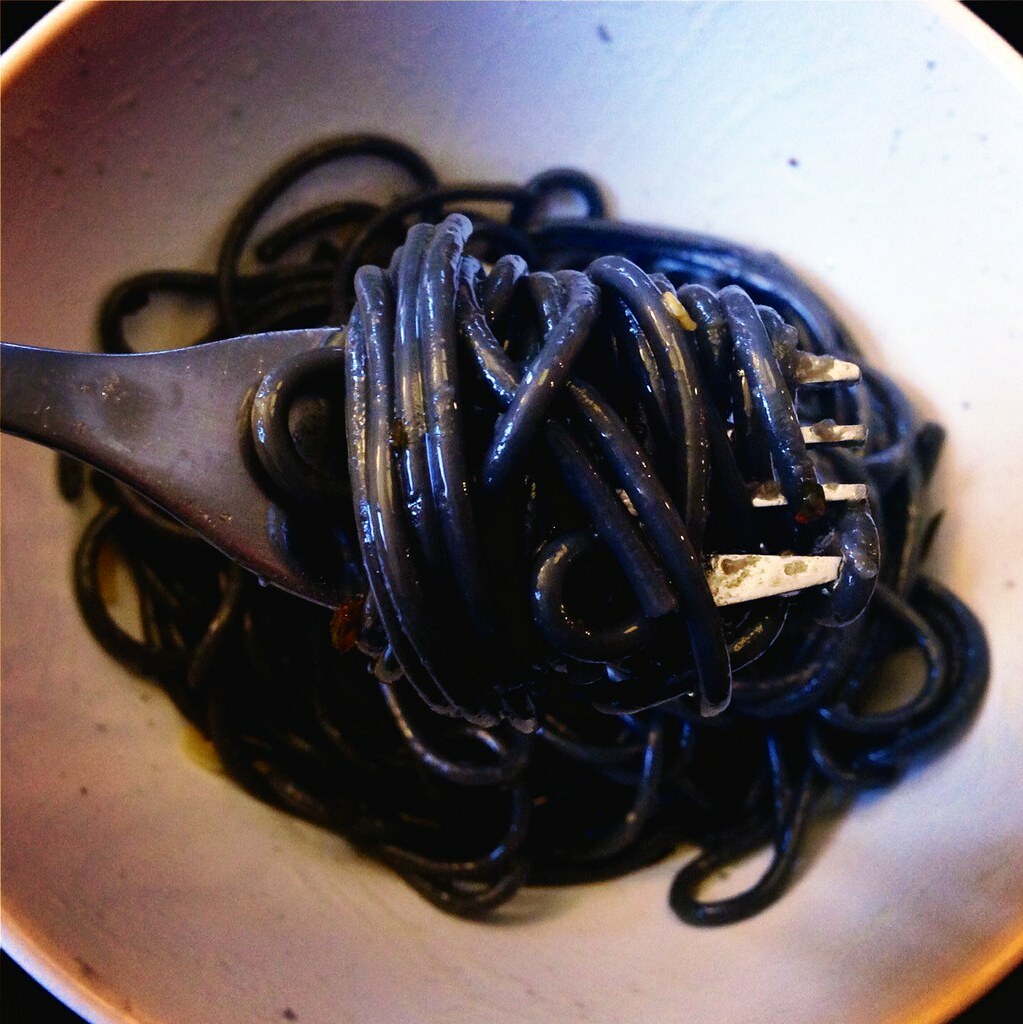